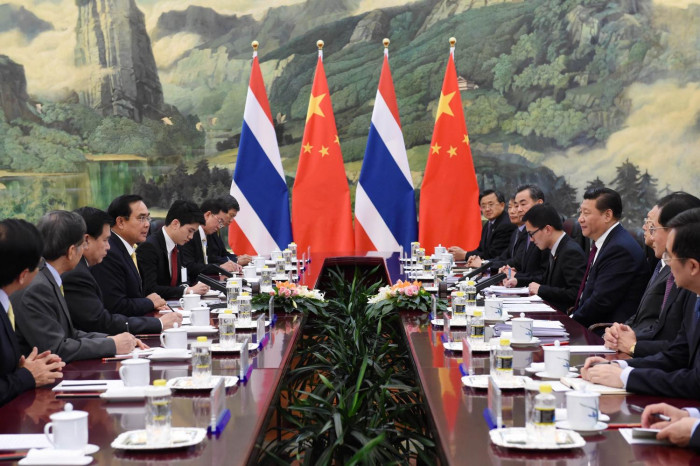 Prime Minister Prayut Chan-o-cha, fourth from left, speaks to Chinese President Xi Jinping, fourth from right, during their meeting at the Great Hall of the People in Beijing, China, December 23, 2014. (Photo: AFP)

This week, the Thai government will welcome Chinese President Xi Jinping with three points in mind, namely that we are now in the Asian century; that China is the undisputed leader; and that the relationship between Thailand and China is essential to peace and stability in the region. Thailand will do its utmost to further strengthen bilateral relations with China in anticipation of the 50th anniversary in 2025 and beyond.

In joint research recently completed by the National Defense College of Thailand, one of the four scenarios described was selected as the future geopolitical trend in the region. He predicts that: Nations are willingly jumping on the China bandwagon; that there is little likelihood of interstate wars; there is extensive economic and financial cooperation, deepening regionalism, and that the region and its people are gradually developing; and that there is a stable political order with a hierarchical structure. It was clear.

On the other hand, Thai strategists have also come up with the reverse scenario, which is dark, titled “Cold War Redux”, with an 85% possibility. It predicts the return of containment, the threat of global nuclear war, many nations choosing defense alliances with the United States, great economic and financial disruption as globalization sharply contracts, and a stagnant regional economy. .

The remaining two scenarios – dubbed “Nirvana” and “Home Alone”, are not feasible. Indeed, the one titled “Nirvana” is too good to be true with all regional and global development poised for economic and security spectra and with no prospect of interstate wars. The worst-case scenario titled “Home Alone” depicts the world in disarray with national survival at stake as interstate wars rage, arms races (conventional and nuclear) and financial and economic transactions disrupted. In the coming days, Thailand will have a first-hand experience with the Chinese leader to test his foresight.

Xi’s attendance at the Asia-Pacific Economic Leaders’ Meeting (APLM) this weekend is timely as it reinforces Thai strategists and policymakers’ perception of China’s role and leadership.

It should be noted that China joined Apec as the first regional economic engagement in 1991, which helped the country open up, lowering the average tariff rate from 39.5% to around 7.4%. In 2020, China’s trade with APEC members reached nearly $3 trillion. China, the world’s second largest economy, can do a lot within the framework of APEC. China has gained experience in using science and technology, especially in sustainable development and green economy. Such expertise will help Thailand achieve its goals under the new economic model, known as the “bio-circular-green economy,” or BCG, which is also enshrined in key APLM outcome documents.

It also helps explain why Thailand was among the first countries to join the Group of Friends of the Global Development Initiative (GDI) when Xi raised the idea at the UN General Assembly in September. last. Indeed, BCG Thailand shares the same key concepts as GDI, focusing on people-centered prosperity as well as balanced, sustainable and inclusive growth. Moreover, these goals are also included in the 2030 Agenda for Sustainable Development.

Due to the absence of US President Joe Biden, who has chosen to attend his granddaughter’s wedding at the White House this weekend, the most powerful APEC leader attending the Bangkok summit will inevitably be the President Xi. His visit this time, his first as head of state, to Thailand comes at a time when the global geostrategic and economic landscape has shifted towards Asia. As such, the international community is watching closely what Xi will say and do during his Nov. 17-19 visit to Thailand. He will be accompanied by his wife, Mrs. Peng Liyuan, who has developed a close relationship with Prime Minister Prayut Chan-o-cha’s wife, Naraporn, since their first meeting in 2014 during the Apec Summit held in Beijing and maintained personal contact. . Xi visited Bangkok as vice president in December 2011.

After the success of the 20th People’s Congress last month, Xi could use Apec’s platform to reassure the world that China is open and will continue to engage the international community. When he reported to Congress on the last day, he said the world needs China, and vice versa. With 21 economies and their leaders converging in person on Bangkok as the threat of the Covid-19 pandemic wanes, Xi can reiterate this mantra, aside from trade and investment issues, with a commitment to contributing to the common good. including by strengthening multilateralism, tackling the climate crisis and promoting economic recovery, food and health security, among others.

In Bangkok, Xi is likely to send at least two clear messages to the global community. First and foremost, China has improved the development of its economic engagement and wants everyone to know that it is moving towards a quality economic model. China is a member of the ASEAN-led Regional Comprehensive Economic Partnership. Beijing also supports the draft Asia-Pacific free trade agreement.

Second, China is ready to raise its international profile and influence so that it can play a greater role in global governance. In a word, China is no longer a spectator. In Bangkok, Mr. Xi is the right person in the right place at the right time. As China’s leader re-elected for a third term, Xi’s legacy hangs in the balance; everything he pursues will be examined.

From the region’s perspective, while China’s rise and broader global profile are welcome, a number of countries are concerned and very worried about Beijing’s new assertion. They hope that China will be able to mitigate and resolve current disputes or any potential hot spots with relevant parties. If Beijing fails to address these concerns, countries in the region will have to seek additional external support or form new alliances that could harm the bloc’s solidarity as well as its ties with China.

After the APLM, Xi and General Prayut will have the opportunity to talk on November 19. As the two sides commemorate the 10th anniversary of their comprehensive strategic cooperative partnership, Thailand and China are looking for ways to rejuvenate their bilateral relationship. In Chinese tradition, when relationships reach 50, it’s supposed to be “the time to know everything about life” (wu shi zhi ming). That is to say, the Sino-Thai relationship has reached maturity and is ready to be further elevated to a higher level to meet new challenges together. By then, they hope to announce the establishment of a community with a shared future between Thailand and China for greater stability, prosperity and sustainability. This would be the task of senior officials from both countries. At present, Thailand and China have excellent cooperation in various fields of politics, security and investment, as well as exchanges in terms of culture and technology.

However, one area that still needs improvement is that of interpersonal relationships, especially among youth and community groups. In addition, there is an urgent need for Thai people to have a better knowledge, understanding and appreciation of China’s history and general affairs. Numerous seminars and discussions between Thai officials and business sectors have often highlighted the lack of full and comprehensive understanding of Chinese thought and traditions among Thai policymakers and academics.

Currently, nearly 900,000 Thais are studying putonghua (Mandarin Chinese) at different levels, thanks to Princess Maha Chakri Sirindhorn, who is very fond of Chinese language and culture. However, there seem to be far fewer Thais choosing China as their area of ​​university study. Today, a handful of Thai scholars have an understanding of the Middle Kingdom. On the other side, Thai studies are taught in 49 universities in China, and thousands are studying the Thai language.

It should also be noted that before the outbreak of the pandemic, from 2013 to 2019, around 10 million Chinese tourists visited Thailand every year, which translated to an average of 30,000 people every day. With such intense contacts and interactions, it behooves policy makers to find ways to transform these people-to-people exchanges so that they become more fruitful, sustainable and mutually beneficial beyond photo ops and package tours.