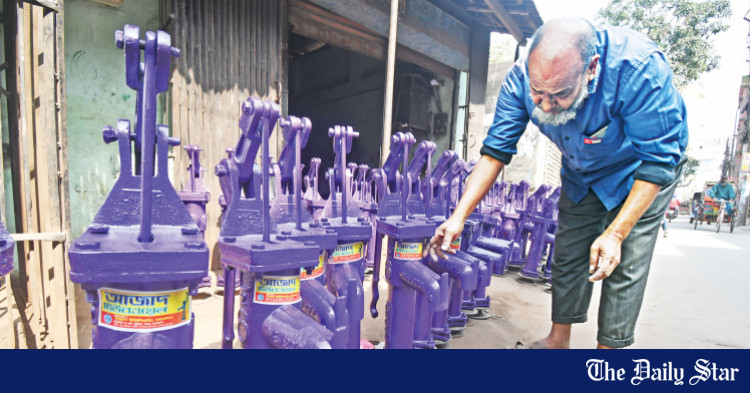 A worker at a tubewell factory in Mofizpaglamor in the city of Bogura displays his products, which are used on farms to secure water for irrigation as well as households for drinking water. However, rising raw material costs have made it difficult for many owners of small factories like this to stay in business. The photo was taken recently. PHOTO: MOSTAFA SHABUJ

A worker at a tubewell factory in Mofizpaglamor in the city of Bogura displays his products, which are used on farms to secure water for irrigation as well as households for drinking water. However, rising raw material costs have made it difficult for many owners of small factories like this to stay in business. The photo was taken recently. PHOTO: MOSTAFA SHABUJ

For all the latest news, follow the Daily Star’s Google News channel.

Bogura tubewell fabricators are going through tough times as raw material costs have nearly doubled in the past two years.

Bogura is a hub for agricultural machinery in Bangladesh, as its foundry industries produce more than 85% of the equipment and spare parts needed by farmers and rural households, including tube wells.

However, many foundry owners have been forced to cut production while others have shut down their industries over the past two years amid the ongoing coronavirus pandemic.

In addition, the increasing use of submersible pumps in homes and the agricultural sector has also hurt Bogura’s centuries-old foundry business.

Take the example of Masud Huda, owner of S Haque Metal Works in the Nowdapara region under the upazila sadar of Bogura.

Huda had to close its tubewell manufacturing plant three months ago after suffering losses from rising costs.

“But the rising cost of raw materials forced me to suspend production,” Huda said, adding that he secured a Tk 4 crore loan from a bank out of the Tk 5 crore pledged by the lender.

“I have already invested Tk 5 crore in the industry.”

Huda is one of about 400 entrepreneurs in Bogura who have pledged to build tube wells to tap into the demand for pure drinking water from households and farms, especially in the north.

For irrigation, about 14 lakh tube wells are used across the country, according to data from the Bangladesh Agricultural Development Corporation.

Bangladesh has nearly two dozen foundries that cater to the demand for tubewells, which is about 12 to 13 lakh per year, said Kamruzzaman Kamal, marketing manager of Pran-RFL Group, which runs Rangpur Foundry, the one of the oldest and largest foundries in Bangladesh. .

Md Nurul Alam, owner of the engineering workshop of MM. Soron, said it was now producing 800 tube wells per month compared to making 1,800 units per month two years ago.

The price of raw materials for the construction of tube wells, such as pig iron, pig iron, ship waste and even hard coke, has increased significantly over the past two years.

“Therefore, I decided to reduce my production,” Alam said.

“Even the nuts and bolts we import from China have become more expensive due to the high tax,” he added.

Anindita Haq Gunjaan, a female owner of the Gunjaan metal workshop located in the BSCIC, said that during the pandemic, production costs had risen a lot.

“Before the pandemic, we used to produce 4-6 times a week, but now we only produce tubewells once a week,” she said.

“If we increase the production of tubewells, we cannot sell it because the demand drops due to the sharp increase in production costs. Besides, the demand of the submersible pump is increasing day by day while the demand for tube wells is decreasing,” Gunjaan added. .

“On the other hand, we have to pay our rent and the salary of our workers. Therefore, we do not make any profit from this sector.”

Kamal from Pran-RFL said that manufacturing tube wells is labor intensive as a number of processes are involved in its manufacture.

He stated that the overall growth of the tubewell market has been slow as these products have a long shelf life.

“Also, the use of pumps has increased due to urbanization,” Kamal added.

He suggested that foundry owners file applications with the BSCIC.

“If they give us a request, we will notify the higher authority in another written request,” Rahman said.

“Then we will discuss with the government how to reduce the price or tax on raw materials,” he added.

How the Chinese presence in Balochistan intensifies regionalist tendencies – The Diplomat