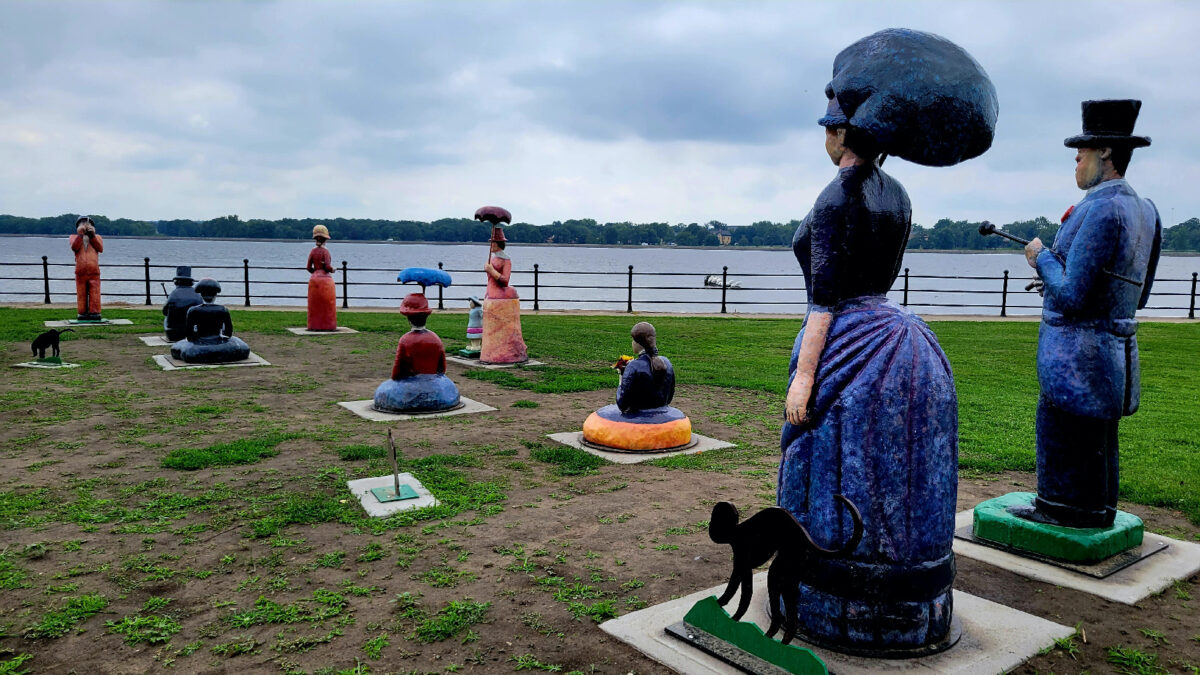 The Whimsical, Wonderful, and Unexpected Art of Davenport, Iowa

This is one of the most famous and easily recognizable paintings of the 19th century: “A Sunday Afternoon on the Island of La Grande Jatte” by Georges Seurat. Painted between 1884 and 1886, he paints a panoramic portrait of Parisian life. What a surprise, then, to meet Seurat’s characters (accompanied by their pets) enjoying a quiet afternoon, not in Paris but on the banks of the Mississippi in the East Sofa, Iowajust 175 miles from where the painting hangs at the Art Institute of Chicago.

Cast in fiberglass and adorned with colors to match the painting, these 12 life-size figures were created in 2000 by a trio of Davenport artists: Ted McElhiney, Thom Gleich and Ben Sunday. Vandalized over time, they were rescued, beautifully restored and relocated in 2022 to their new location, East Lindsay Park. They are as whimsical and wonderful as they are unexpected, qualities that also apply to other arts in Davenport.

In many great American museums, collections were first assembled by men of fortune, and such was the case on October 12, 1925, when the doors of Iowa’s first municipal art gallery opened in a converted arsenal in Davenport. The campaign for its creation had been led by Mayor Charles August Ficke, who donated 334 paintings from his collection to prime the pump. The Davenport Daily Times said, “He who gives in the name of art does indeed give.”

A shrewd collector, Ficke made his first significant acquisitions in 1901 during a trip to Mexico, where he bought an important set of religious paintings from what is called the “viceregal period” (1535-1821). Over time, its collection of early Spanish and Mexican religious art and artifacts grew considerably, gradually expanding to include American and European landscapes.

Other important collections donated were the collections of American artists of Clara Brandt and Nan Wood Graham, notably the American regionalist Grant Wood, who was Graham’s brother. An extensive collection of Haitian art was donated by Walter Neiswanger and the significant purchase of the photography collection amassed by New York gallerist Brent Sikkema.

In 1987, the former Armory Gallery opened as the fully accredited Davenport Museum of Art. What was needed, however, was a significant new building that could provide ample gallery space for the collection and curated exhibitions, which meant that Davenport had arrived as a large community worthy of a museum of art.

The building campaign was led by local financier Kahl Figge, whose name is affixed to the gleaming 100,000 square foot glass and steel structure designed by architect David Chipperfield that now features the collections. Construction began in September 2002 and the doors opened three years later.

Chipperfield’s design consists of a rectilinear block crowned by a solitary tower encased in glass panels. Its apparent simplicity is offset by the constant play of light and the elements on its reflective surfaces that seem to continually move and change color.

The substance of any significant museum lies in the depth of its permanent collections and the imagination behind its curated exhibits.

Today, it is equally important for a museum to emphasize inclusivity, diversity, and concerted community outreach. In this regard, the Figge is exceptional, particularly in the size of its educational outreach programs. The current display of Ficke’s Baroque religious works, juxtaposed with elaborate Dia de los Muertos sculptures, paintings and altars by contemporary Hispanic artists, is a prime example of curatorial rethinking. It is a thought-provoking and visually striking way of presenting this art, its themes and historical context.

Just a few blocks from the Figge’s gleaming glass exterior is a much more modest establishment called Hot Glass, Inc. Housed in a former industrial space and funded entirely by grants and donations, this hands-on, non-profit studio lucrative is dedicated to “teaching, presenting, interpreting, collecting, documenting, and preserving the contemporary glass art movement with a particular focus on veteran and youth team building.

The driving force behind Hot Glass, which was founded in 2012, is former Moline High School football coach Joel Ryser. After retirement, Ryser paired his interest in learning the art of glassmaking with funding for a school grant program called “Lights on for Learning” which focused on helping at-risk children. . Ryser based his approach on a mentorship program in Tacoma, Washington, which was founded by internationally acclaimed glass artist Dale Chihuly. The connection he saw immediately was that the process of making glass and scoring touchdowns required teamwork.

As Hot Glass’s success grew, its mission expanded to include veterans, especially those trying to address PTSD issues after combat deployments.

“It’s a win-win situation for everyone,” Ryser told me as we watched his son, Logan, and several blast-furnace vet members turn pieces of molten glass into works of art. The finished pieces are then sold to further support the organization.

If you’re staying at a hotel in Davenport, you might see artwork produced by Hot Glass students and vets for sale in the lobby or in your room. It is a noble cause.

The “Sunday in the Park” sculptures can be seen at Lower Lindsay Park, Village in East Davenport, Iowa. The parking lot is south of River Drive and east of Mound Street.