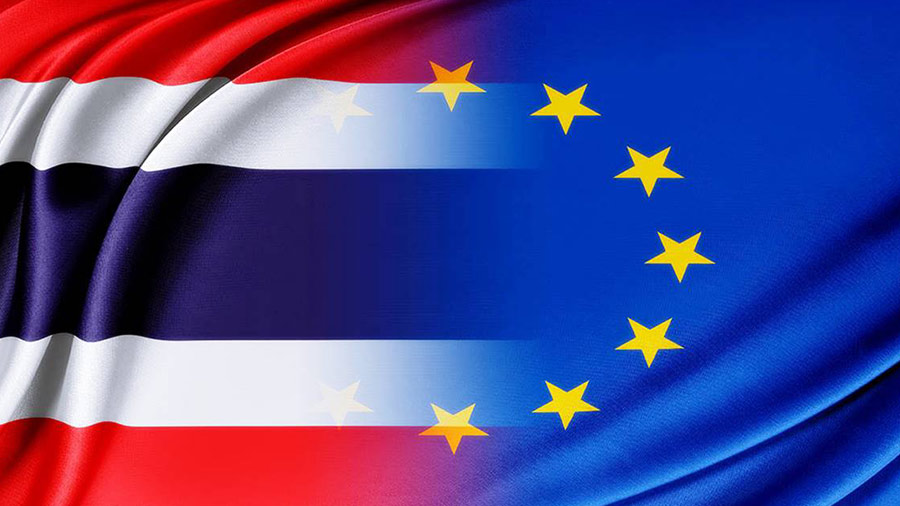 Thailand and the European Union (EU) have agreed to resume negotiations on a free trade agreement (FTA), seven years after talks broke down in 2014 following the military coup in Thailand.

If the two sides strike a deal, it would mark the EU’s third FTA with an ASEAN member state, following the agreements with Singapore and Vietnam.

An FTA would boost EU access to trade and investment in Southeast Asia’s second-largest economy, while Thai exporters would benefit from lower tariffs. Nonetheless, as momentum towards an FTA has been revitalized, the EU and Thai governments must resolve several outstanding issues to finalize a deal.

Many EU companies base their Southeast Asian production on Thailand due to its location in the region and its status as ASEAN’s second-largest economy after Indonesia. Establishing an FTA would ease trade and investment barriers for EU businesses, making Thailand an even more attractive regional base.

Why did the FTA talks collapse?

The EU and Thailand began talks on an FTA in 2013. The EU sought to strengthen ties with ASEAN’s second-largest economy, while the Thai government was motivated to mitigate the impacts of the loss of the country. ” access to trade aid under the EU’s Generalized System of Preferences (GSP). .

The GSP scheme is an EU development program that offers low or zero tariffs to developing countries. Thailand has become too rich to be eligible for the SGP scheme, losing its eligibility in early 2015.

In 2014, the Thai military took control of the government via a coup and suspended the constitution, resulting in a severing of ties with the EU, which called off trade negotiations.

In December 2017, however, the EU’s Foreign Affairs Council decided to pursue a gradual re-engagement with Thailand. The move said the EU could explore the possibility of resuming FTA talks provided Thailand has a democratically elected civilian government under the new constitution.

The military ruled the Thai government directly until March 2019, when a coalition of pro-military parties formed the government after an election. The EU considered this development sufficient to resume trade negotiations, leading to an agreement in June 2021 to resume negotiations.

Trade negotiations are expected to take place in 2022 using a common understanding document as a framework, which covers issues such as trade in goods, services and investments, as well as intellectual property, e-commerce and government procurement.

What problems need to be resolved?

There are a number of issues that need to be resolved for the EU and Thailand to come to an agreement.

Sticking points in the negotiations on the EU side include the relatively high alcohol taxation in Thailand, opaque public procurement procedures and industry-specific market access issues. The EU is also reluctant to increase market access for Thai agricultural and fishery products.

For Thailand, concerns about an FTA are largely related to the need to meet stricter EU regulatory standards and remove non-tariff barriers. Problems that need to be resolved include labor and environmental standards, and intellectual property, among others. EU stakeholders, for example, have criticized labor abuses in Thailand, including the treatment of migrant workers.

The Thai government is also concerned about the opening up of the country’s financial sector, as well as the potential impacts that stricter intellectual property enforcement could have on the country’s burgeoning medical industry.

Who benefits from an EU-Thailand FTA?

By far the largest category of EU imports from Thailand is machinery and equipment, which accounted for 52.3% of total imports in 2020.

Under an FTA, the manufacturing of machinery and appliances, electronics and vehicles will be winners. In addition, exporters who prospered with access to GSP would benefit, such as those of food and beverages, pearls and rare stones, and clothing.

Moreover, the EU’s FTA with Vietnam entered into force in 2020, increasing the urgency of the Thai government to reach an agreement. Like Thailand, Vietnam is strong in export-oriented manufacturing, but its low European tariffs give it a competitive advantage in the region.

Reflecting the EU’s imports from Thailand, machinery and household appliances constitute the bloc’s largest category of exports to the country, accounting for 36% of the total in 2020. Products of the chemical or allied industries were the second largest. EU category, at 18.2% of total exports.

An FTA would also benefit EU-based exporters in sectors such as machinery and appliances, clothing, and food and drink.

Besides Thailand, the EU has conducted trade negotiations with Indonesia, the Philippines and Malaysia in recent years, with mixed results. Nonetheless, the negotiations, in the wake of a successful deal with Vietnam, reflect a concerted EU effort to strengthen economic ties with Southeast Asia.

ASEAN Briefing is produced by Dezan Shira & Associates. The firm assists foreign investors throughout Asia and has offices throughout ASEAN including Singapore, Hanoi, Ho Chi Minh City and Da Nang in Vietnam, Munich and Esen in Germany, Boston and Salt Lake City in the United States, Milan, Conegliano and Udine in Italy, in addition to Jakarta, and Batam in Indonesia. We also have partner firms in Malaysia, Bangladesh, the Philippines and Thailand as well as our practices in China and India. Please contact us at [email protected] or visit our website at www.dezshira.com.

The recent debate over SRK and hockey made us revisit ‘Chak De! India’