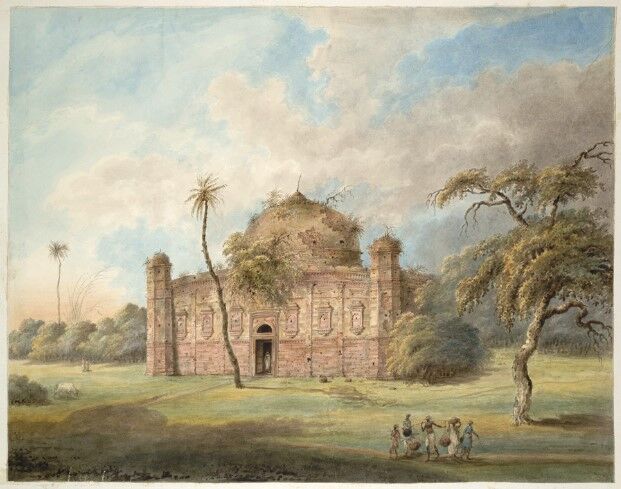 He lived in the early 1400s, and later sources claim that Raja Ganesh was a powerful local Brahmin landowner from Bengal whose family had enjoyed prominent status in the delta for over four centuries. In 1410, Raja Ganesh assumed so much power in Bengal that he flamboyantly took control of the state and ruled by four puppet rulers.

His ancestors had seen the rise of the Delhi Sultanate, and the subsequent integration and independence of Bengal from the Sultanate, whose struggle to bring Bengal into its fold, unsuccessfully, instilled in the Bengali people a sense of local identity. , and almost shaped what some now call the Bengal Sultanate.

For some, it is this local identity that endures to the present day, where Bengalis are ruled by Bengalis who conform to the larger economic structure of a regime, but in the Bengali way.

Raja Ganesh in 1415 enthroned his own twelve-year-old son while ruling as hakim or regent of Bengal guiding political and economic reforms. Interestingly, Ganesh did not revive the Brahminical pattern of kinship from an earlier phase in history and instead converted his own son to Islam. He would rule as Jalaluddin Muhammad, with coins issued in his name in the Persian style of kings before his father.

This cautious choice was forcefully put forward to anchor in the dominant state order a greater opportunity for more Hindus to be assimilated into the governmental structure of Bengal. When Raja Ganesh took control in 1410, he would have faced opposition from an orthodox Sufi order, which opposed a “converted” king ruling the state in the name of Islam.

Jalal al-Din Muhammed, as he grew as a sultan, began to commit to a future greater than himself, to building a globally recognized state in the wider Islamic world. Jalal al-Din’s diplomatic missions in the west attracted worldwide attention in Bengal, including the Mamluk Sultan of Egypt when he patronized a religious college in Mecca and rebuilt mosques destroyed by his father. This clarified his state’s assimilation into international networks of wealth and power.

Jalal al-Din proclaimed himself the ‘caliph of god in the universe’, one of the highest titles in the Sunni world according to Richard M. Eaton, author of the book India in Persian times. In public, this king had completely converted to Islam and become a devout Muslim, who would profess and proclaim Islamic reforms to build an Islamic kingdom and urge his ministers to convert to Islam.

Nonetheless, like other Muslim leaders in the region, he built his state as a blend of the local and the global. Symbols of Persian imperialist kinship were presented across material culture but with a clear local aesthetic. His court was ruled in the Bengali language, while other sultans in the subcontinent desperately tried to conform to Iranian finesse. In this way, the sultanate founded by his father’s masterstroke found a deeper hook into society and the regime.

Architecturally, Bengali mosques have adopted local structural elements and motifs such as the single-domed brick building and extensive terracotta ornamentation, borrowed from Buddhist shrines and monasteries in Bengal, such as the Somapura Mahavihara in the current Bangladesh.

Hindu temple beyond a cluster of thatched houses, Calcutta

Jalal al-Din had left a legacy of successful and syncretic state policy that enabled Hindus in a medieval Islamic state to rise to positions such as chief minister, head of bodyguards, mint master, private doctors, etc.

Between 1450 and 1550, more than 100 state-sponsored brick and stone mosques sprang up in the Bengal Delta. The court has also given strong support to Vaishnav devotional literature in the Bengali language.

A clear departure from Shaiva literature was noticed in Bengal, where Bengali folk literature or Vaiśnava literature was favoured, and the same goes for the appointment of Bengali officials who were favored over Śakta Brahmins.

During the reign of the books of the sons of Raja Ganesh as Sri Krishna-Vijaya, Manasa Vijaya, Padma-Purana, Krishna-Mangalaand parts of mahabharata were frequented and translated into Bengali.

Meanwhile, a building program across the delta has seen the strengthening of folk architecture inspired by the thatched-roof bamboo hut found throughout Bengal. Features such as the curved roof of the terracotta mosques and temples of Bengal are based on the natural curve of bamboo under the weight of thatch.

For some, this spirit of regionalism gave the people of Bengal confidence in the strength of their own culture and an air of acceptance that all cultures would flourish simultaneously in Bengal.

Raja Ganesh set the stage for continuity rather than revenge. He chose to signal the merits of pushing for plurality within the state structure rather than imposing one state structure on the other. More importantly, he didn’t push for his own legacy. It is ironic that lost heroes such as Raja Ganesh, in retrospect, are celebrated with far greater credibility than leaders who exposed their separatist and ideologically driven personal agendas.

Aquatint by Henry Creighton from 1817. It shows stone slabs from the Chota Sona or the Little Golden Gaur Mosque in West Bengal. Most Gaur monuments lack epigraphs, some of which have been removed for preservation while others have been lost over time. Gaur’s complex past is reflected in the fact that much of the building material preserves the reused remains of sacred sites of other faiths. Where an image had to be totally enveloped in a different structure, it was left untouched. Most of the surviving monuments in Gaur date from the period after the Bengal Sultanate’s capital moved from nearby Pandua in the mid-15th century.