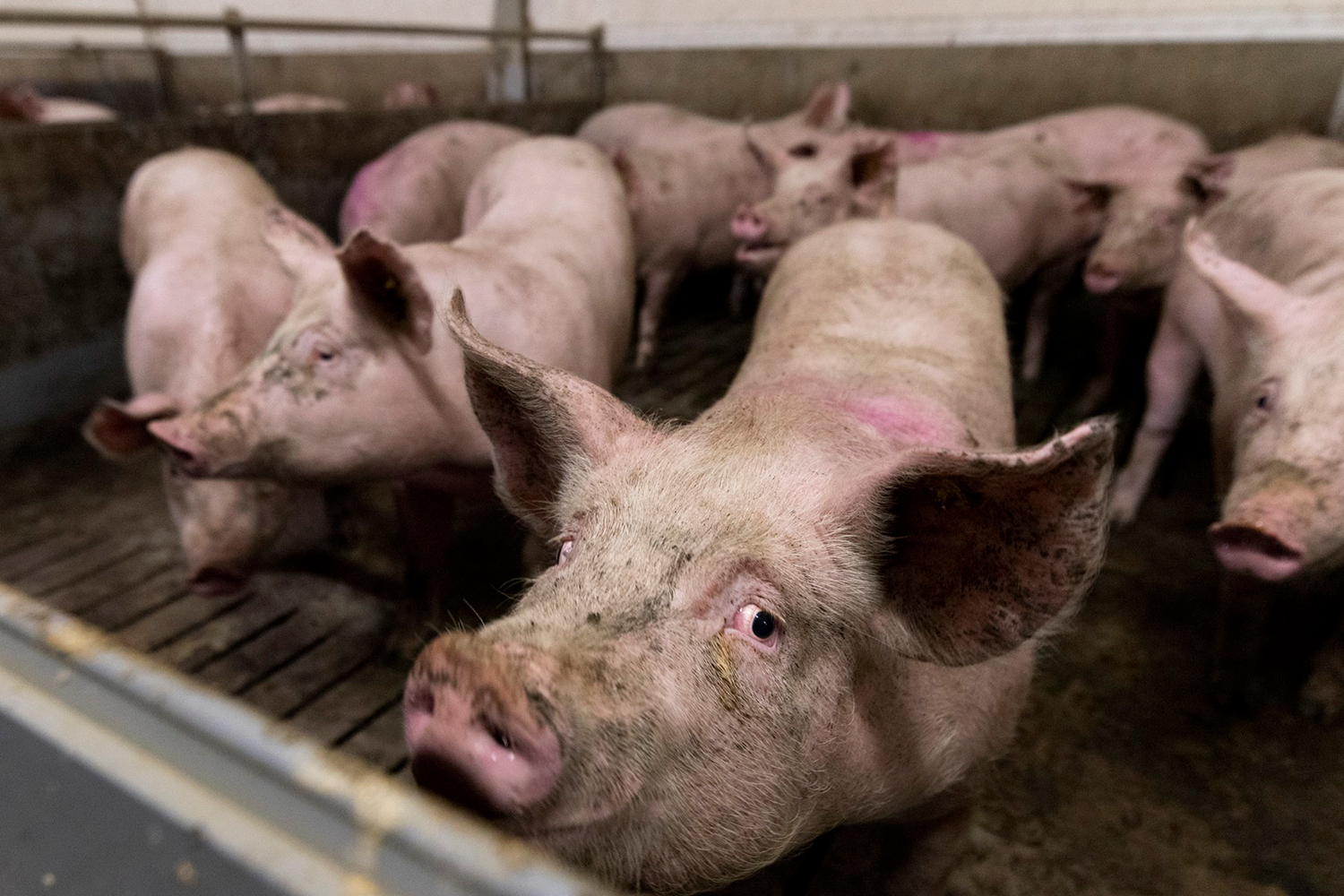 A month ago, I debunked four misconceptions about the Dutch agricultural crisis: that shrinking Dutch agriculture will lead to food shortages; that the Dutch government is prioritizing an elite green agenda over the livelihoods of its people; that farmers are driven off their land to build houses; and that the media does not cover the story.

The latter is obviously wrong, but as the farmers’ protests got more media attention, I also read more errors and pure inventions.

Before I demystify them, let me recommend some better sources. AFP and Time both have great stories. In addition to my Atlantic Sentinel June explainer, I have an article in World Policy Review why the agricultural crisis in the Netherlands is a warning to food producers around the world: that factory farming is a dead end.

1. Farms must close to comply with climate targets

The Association of Mature American Citizens, weekly farmersnews from america, The post-millennium and climate change skeptic Bjørn Lomborg, writing in The Wall Street Journalincorrectly report that the Dutch government wants to close farms in order to reduce greenhouse gas emissions.

Rebel News correctly identifies the relevant emissions as nitrogen, but still maintains that reductions must “conform to globalist climate goals”. They are not.

Nitrogen oxide, which cars and industries emit when they burn fossil fuels, is a greenhouse gas that warms the Earth. Ammonia, which emanates from manure, is not. 65% of Dutch nitrogen pollution consists of ammonia. 80% of ammonia emissions occur within 250 kilometers of their source, approximately the distance between Amsterdam and Cologne, Germany. The Netherlands has the highest ammonia emissions per hectare in the EU after Malta.

All this to say: Dutch nitrogen pollution has little to do with climate change and even less with the rest of the world. This is a local problem that affects people, plants and wildlife in the Netherlands.

Nitrogen helps certain plants, such as crops and grass, grow faster. This is why manure is a natural fertilizer and nitrogen is used in artificial fertilizers.

But where some plants grow abnormally fast, others wither and die. Perishing flowers and plants deprive insects of their source of nutrition. The Netherlands has lost 70% of its insect population over the past thirty years. This, in turn, deprives the birds of their food source. The Netherlands has failed to meet EU standards for the protection of birds and their habitats since conservation rules were introduced (with Dutch support) in the 1990s.

Too much nitrogen in the soil kills microbes that help maintain soil fertility. Farmers resort to using artificial fertilizers, but this makes the soil completely dependent on synthetics.

Nitrogen seeps into groundwater, which farmers use to irrigate their crops and which the Dutch drink. Along with bird and habitat regulations, the Netherlands has consistently violated the EU Nitrates Directive.

Too much nitrogen in the air can harm people. In the province of Brabant, on the border with Flanders, life expectancy is a full year lower than in the rest of the country due to air pollution. Cars and industries share the responsibility, but it is no coincidence that Brabant has the largest livestock farms in the country with the highest ammonia emissions.

2. Farmers are singled out

This is a complaint from Dutch farmers themselves: what about the airlines? What about the industry? BreitbartFox News and Pig’s World the monkey without criticism.

Airlines only cause a fraction of nitrogen emissions. Cars and industry cause about 35%, farms 65%.

When you take into account foreign nitrogen emissions, mainly from Belgium and Germany, the share of Dutch cars and industry drops to 20% and that of farms to 40%.

Nitrogen pollution of the soil is caused almost entirely by agriculture.

It’s not that other sectors of the economy won’t contribute. The government must present a plan for the industry after the summer. From a public relations perspective, it would have been better to release both plans simultaneously, but that would have meant keeping the plan secret from farmers while officials drafted the plan for industry. You can imagine the reaction if such a “secret plan for farmers” had been leaked in the meantime.

The EU as a whole will ban the sale of petrol and diesel cars in 2035. Most new cars sold in the Netherlands are already electric or hybrid. The maximum speed on Dutch autobahns has been reduced from 130 to 100 kilometers per hour in a (largely futile) attempt to reduce nitrogen emissions.

3. There is no help for farmers

Dan McTeague of Canadians for Affordable Energy says there is no transition plan for farmers, but there is: a transition fund of 25 billion euros for the next eight years plus 7 billion euros previously budgeted agricultural expenditure that will be reallocated to:

There are just over 30,000 breeders in the Netherlands. 32 billion euros (4% of GDP) represents approximately 1 million euros per farm.

There are parts of the country where the reduction target is 70 or even 95%, to create buffer zones around conservation areas, but such reductions are virtually unachievable for farmers. Hence the 11,000 who would be expropriated.

4. Why would the Netherlands endanger the world food supply?

Why indeed. If the best answer you can think of is that all the pundits, officials and politicians who have been working on this issue for three years, and in some cases longer, are idiots – which is essentially what One America News, the New York PostBrendan O’Neill of Sharp and Samuel Dutschmann of The viewer say – you haven’t dug deep enough.

This includes non-food products: 9% of Dutch agricultural exports are flowers and bulbs.

It also includes 26% re-exports: products like avocados from Mexico and citrus fruits from North Africa that are shipped via the port of Rotterdam to Germany and central Europe.

The rest is food. The Netherlands exports 75% of the food it produces, including 65% of its milk and 60% of its meat. The Netherlands is the fifth largest dairy exporter in the world and the largest meat exporter in Europe. Exports of dairy and meat products were worth 18 billion euros last year, or 2% of GDP.

Half of exports go to just four countries: Belgium, France, Germany and the United Kingdom. Countries where, like the Netherlands itself, dairy and meat consumption is far above what nutritionists would consider healthy. The Germans won’t starve when the Dutch sell less pork sausages. German meat consumption is down anyway, by 12% over the past decade.

People go hungry when developing countries in Asia and Latin America sell their grain and soybeans to Europe, where they get a better price to feed chickens, cows and pigs than they would. home to feed people. Cereals and soy are exempt from otherwise high EU food import tariffs – for this very reason. The Netherlands is the fourth largest grain importer in the world and the second largest importer of soybeans, after China. 93 percent of imported soybeans are processed into animal feed.

Dutch products truly feed the world. The world’s most efficient precision agriculture and greenhouses produce and export billions of cucumbers, peppers, potatoes and tomatoes each year.

But the imports needed to make the Netherlands a dairy and meat exporter are exacerbating, rather than alleviating, global food insecurity.

5. Agricultural cuts in the Netherlands are part of an international conspiracy

It’s not really a conspiracy when it’s all out in the open.

There is no direct link to Dutch nitrogen policy, but One America News, Rebel News, The American Conservative, The Federalist and The hill goes up find it suspicious that the government’s long-term plan for agriculture, which in addition to cutting emissions includes things like switching to circular farming and more plant-based diets, matches that of the World Economic Forum , which in turn refers to the United Nations Sustainable Development Goals for 2030.

These are not coincidences, nor a conspiracy.

The work of the World Economic Forum on agriculture and food is influenced by Dutch research, since the Netherlands is at the forefront of agricultural innovation. The WEF does not tell the Dutch what to do. Rather, the Dutch are telling the WEF – a non-governmental organization with no enforcement powers – what they should be doing for farms and food systems around the world.

The Sustainable Development Goals are broad ambitions, such as: clean water, zero hunger, saving wildlife. Countries adopted them in 2015. They are not enforceable, nor do they prescribe how the goals are to be achieved.

Some governments, such as the Netherlands, claim to take the targets into account when designing policies, but there is no direct link to cuts in agriculture. Other countries completely ignore the goals. The UN has a ranking of how countries are doing.

It’s a duck that I’ve heard and read about in various media, including AMAC, The hill goes up and The spectator. None of them give concrete examples, because there are none. Google the Dutch version of “farmers are extremists” (boeren zijn extreme) and you get exactly three results, all from random, anonymous people on message boards.

Reporters cited officials, who condemned particular actions, such as dumping and burning manure on highways, as extreme.

Many (extreme) right-wing journalists have called the Dutch government extremist for its policies.

Personal Treasures: After Decades of Collecting Art, Cynthia and Heywood Fralin Share Paintings in an Exhibit at the Taubman Museum of Art (copy) | Z-non-digital