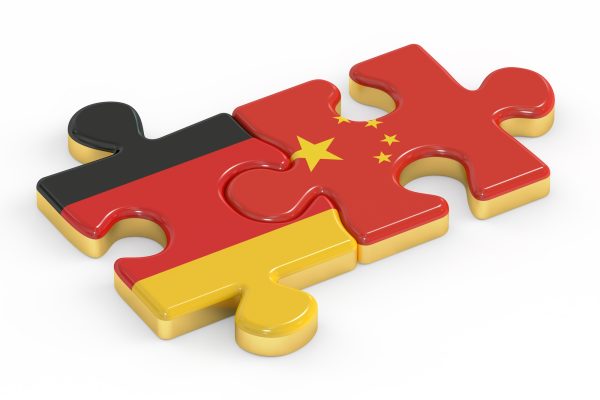 Missing in action? – The Diplomat

Despite signs to the contrary as the departure of former Chancellor Angela Merkel and the change of the guard in Germany approach, the country’s China policy seems to be continuing on its usual commercial line. Olaf Scholz is due to make his first trip to China as Chancellor in early November, accompanied by a trade delegation. He was adamant that Germany will maintain its profitable trade relationship with China, abandoning ideas of “decoupling” the country. However, this line is increasingly at odds with many both in Germany’s domestic politics and among its partners in the EU and elsewhere.

Scholz’s foreign minister, Annalena Baerbock, argued for a tougher line on China both during her candidacy for chancellorship and later as foreign minister. In September alone, reports came in that Germany was preparing a new trade policy that would put an end to “naivety”, according to the German trade minister. The policy also includes plans to restrict Chinese investment in infrastructure and refrain from supporting initiatives such as the Belt and Road.

Seen in this light, Scholz’s trip to China and the recent decision, taken against opposition from ministries and coalition partners, to allow the Chinese state-owned shipping company COSCO to acquire a share of the port of Hamburg send signals mixed to other EU countries on Germany’s leadership. Scholz wants to see Germany continue to enjoy the very real economic benefits its relationship with China can bring – and here he has the support of much of German industry. At the same time, politicians in Germany and beyond are looking to Scholz for a more strategic and coordinated China strategy that takes into account the major uncertainties that geopolitics introduces into trade and investment relations.

Scholz’s mixed approach to relations with China comes at a time when the United States and many EU partners are looking at China with much more suspicion. China’s support for Russia’s war in Ukraine has upset many, but the roots of the problem run deeper. Lithuania may have been a canary in the coal mine in Europe, speaking out about China’s human rights record and coercive business practices earlier and louder than most. Other countries in Central and Eastern Europe – a region whose participation in the China-led 17+1 format sparked concerns of a divided Europe just a few years ago – are turning sour against China. Italy’s new Prime Minister Giorgia Meloni has long been critical of China, and Britain’s Rishi Sunak quickly found common ground with the United States by calling China’s influence “malignant”.

Just last week, French President Emmanuel Macron said a visit to China so soon after the 20th Party Congress would be seen as too legitimate a gesture towards Xi’s leadership, and that he would have preferred a joint visit with Scholz to show European unity. Meanwhile, Belgium’s foreign minister has warned of potential security risks from Hamburg’s COSCO deal. From now on, it is Germany whose Chinese policy seems increasingly out of step with its European partners.

There are various reasons to predict that Germany’s current approach will become increasingly difficult to sustain given its position within the EU and more generally among Western allies.

First, the main points of tension in China-EU relations, such as China’s support for Russia, aggression towards Taiwan and human rights violations in Xinjiang, are fundamental issues for China and EU, and neither side is likely to change course. . This dynamic pushes them towards a more complicated and stimulating relationship.

The deterioration in recent years of EU-China relations on issues such as human rights abuses in Xinjiang, Hong Kong and elsewhere, China’s hardened stance towards Taiwan and growing authoritarianism in the country are fundamental problems for both parties with no easy solution in the short term. The EU cannot, and would not, be seen as backtracking on its line of protesting and sanctioning human rights abuses, any more than China wants to backtrack on what it sees as internal security imperatives, or be seen as yielding to foreign interests. requests.

Likewise, the more foreign countries support Taiwan, the more pressing the issue becomes for a Chinese Communist Party that is increasingly sensitive to its prestige and sensitive to perceived threats. At the same time, given the amount of political capital invested in supporting Taiwan in many EU countries and the enormous geopolitical and economic shock of any conflict in Taiwan, it is unlikely that the countries of the EU are reducing their engagement on the issue and will start preparing for possible economic disruptions should the worst happen.

Second, Germany is in a position where it is a leader in the EU but finds its China policy at odds with many other bloc member states, even though a more unified approach would benefit everyone.

Germany itself called for a more united European stance in geopolitics and acknowledged the need for a more strategic approach towards China. Still, it sends mixed signals, with Scholz heading to China just weeks after the Communist Party Congress and at a time when many European countries are becoming increasingly critical of China. The history of European foreign and trade policy shows that to exert influence, Europe must be united. As Europe’s biggest trading partner with China, Germany would benefit as much as anyone from a united Europe behind the promotion of common rules. However, Germany is increasingly swimming against the tide in a Europe that wants a tougher approach to trade and politics with China.

All of this paints a picture of a country trying to carry on more or less as usual as the world around it has changed. This is not to say that Scholz should necessarily acquiesce to the more hawkish voices in the EU, but it should show that Germany is actively engaged in creating and aligning with common European approaches to China. This approach is also increasingly in demand by German companies.

Third, the United States and other NATO and Western allies are likely to exert more pressure on countries to close ranks on issues related to trade and openness to Chinese investment in critical infrastructure.

As the security situation in Europe and Asia-Pacific continues to deteriorate, Germany, as a member of NATO and the EU, will be increasingly involved. Growing alienation from China and the United States will also affect Germany. In military affairs, this could mean having to decide Germany’s approach to a potential conflict in Taiwan, where there would likely be significant pressure to actively support the United States. Economically, the United States and Europe are increasingly treating foreign direct investment as a security issue, and sales of critical infrastructure or technology to China may put Germany at odds with the US legislation or make it the target of US political pressure to limit sales. . With the future of Chinese trade looking more uncertain than before, even in optimistic assessments, Germany will have to be attentive to the views of its major partners.

These three major currents in China-EU relations are difficult to reverse and will likely continue to define Germany-EU-China relations. Germany’s recent lack of cohesive direction on its China strategy sends the wrong message at a time when there is a growing consensus on the need among other EU leaders for a more strongly strategic approach.

Scholz may be right to say that it is important to continue the dialogue and that a complete decoupling is currently not possible. However, its recent decisions risk repeating a long-term European weakness, namely the lack of a unified approach to international affairs. Such an approach will not manifest itself without German support, and Scholz should be more heedful of the warnings of his own government and his European partners – some of whom have already shown a keen geopolitical eye. The combined pressures of an uncertain security situation and a shifting European consensus could still force Germany to change its approach, and Germany will be in a better position if it is willing to lead change rather than change ground.