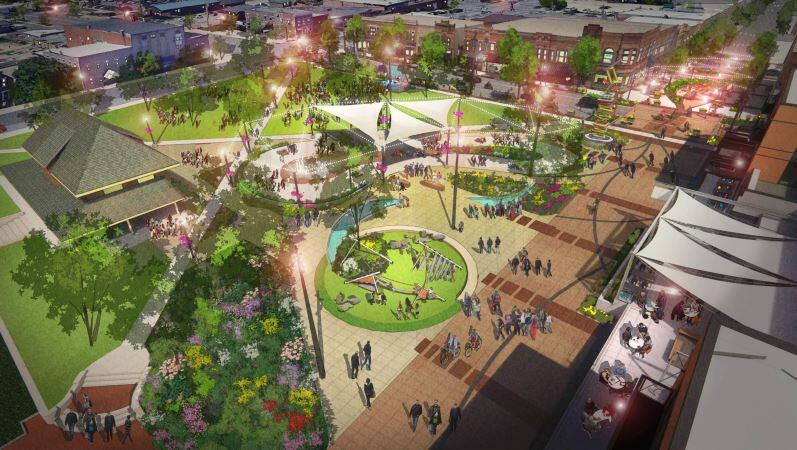 Renderings of the future Uptown Central Plaza at Marion. (Courtesy of RDG Planning and Design)

MARION — The city is seeking more than $3.5 million in state-allocated U.S. Federal Rescue Plan Act funds to fund two major projects that will contribute to the city’s goal of making Marion a regional destination.

Marion is seeking funding for the Uptown Central Plaza project as well as the final phase of the highly anticipated CeMar Trail through the Destination Iowa grant process. The total cost of the two projects is just over $9 million.

The Central Plaza at City Square Park, in the heart of Uptown Marion, has been under construction since the city’s ImagiNext visualization process completed in 2018. The project is expected to begin after the Uptown Marion Seventh Avenue Streetscape and North Plaza project at 11th Street , which should be completed this year.

The park’s redesign includes a ring of the plaza that can be transformed into a skating rink during the winter, an artistic “tree of peace”, flexible outdoor seating, water features, a play structure, a event and space for festival and market tents.

Renderings of the future Uptown Central Plaza at Marion. (Courtesy of RDG Planning and Design)

The park’s train depot may also see some upgrades, including a potential warming house during the winter, restrooms, and mechanical rooms for the various water features.

The cost of park improvements is estimated at over $5 million.

Earlier this year, Governor Kim Reynolds announced the Destination Iowa Grant program, which uses $100 million in federal COVID-19 relief funds to invest in “transformative, shovel-ready attractions.” Destination Iowa applicants must show they have secured at least 60% funding for their projects, which must be completed by 2026.

“The Central Plaza provides the wow factor in the app, but the connection to the trail is what will really bring the whole metro area together,” said Marion Community Development Manager Tom Treharne. “A trail connecting Uptown Marion to downtown Cedar Rapids has been a goal for not just years, but decades.”

The last 1.3 miles of the trail is what is proposed in this project. It will connect the Cedar Rapids and Marion trail portions south of Highway 100. The connection will allow trail users to access Uptown Marion and its future central plaza from across the region, with connections to the larger nature trail from Cedar Valley as well.

About $18 million has already been invested in the CeMar Trail project, which included new pedestrian bridges in Marion. The last part of the project is expected to be completed in the fall of 2025.

People walk along the trail during a grand opening ceremony last July for an old railroad bridge that was rebuilt as part of the CeMar Trail project in Marion. (The Gazette)

“We see great opportunities to partner with Cedar Rapids Downtown District and Czech Village/New Bohemia Main Street on events throughout the year,” Treharne added. “Connecting Uptown Marion to downtown Cedar Rapids is what will really draw visitors from across the Midwest.”

In May, Cedar Rapids requested $27 million through the Destination Iowa program to help pay for the $119 million Greenway Recreation and Revitalization project. This is part of a long-term vision to transform the greenway around the Cedar River in the New Bohemia and Czech Village neighborhoods with a project to support flood control, recreation and housing in an effort to attract tourists and stimulate offers for residents and businesses.

“We’ve talked about exploring a partnership with our grant application projects, and we each have these wonderful attractions and we’re going to promote that regionalism,” Waller said. “The CeMar Trail will connect the areas that are in our two apps.”

“This is a regional project and the funding is great for Marion, but it really provides us with a strong relationship with Cedar Rapids, and with bike tourism becoming even more important since the pandemic, we could do so much more. of events that are bike-driven across the region,” Treharne added.

There is no deadline or time frame for Marion to find out if the funding has been granted, but Treharne and Waller are happy with Marion’s application.

“We took our time and made sure all of our ducks lined up,” Treharne said. “It was thoughtful planning in the app.”