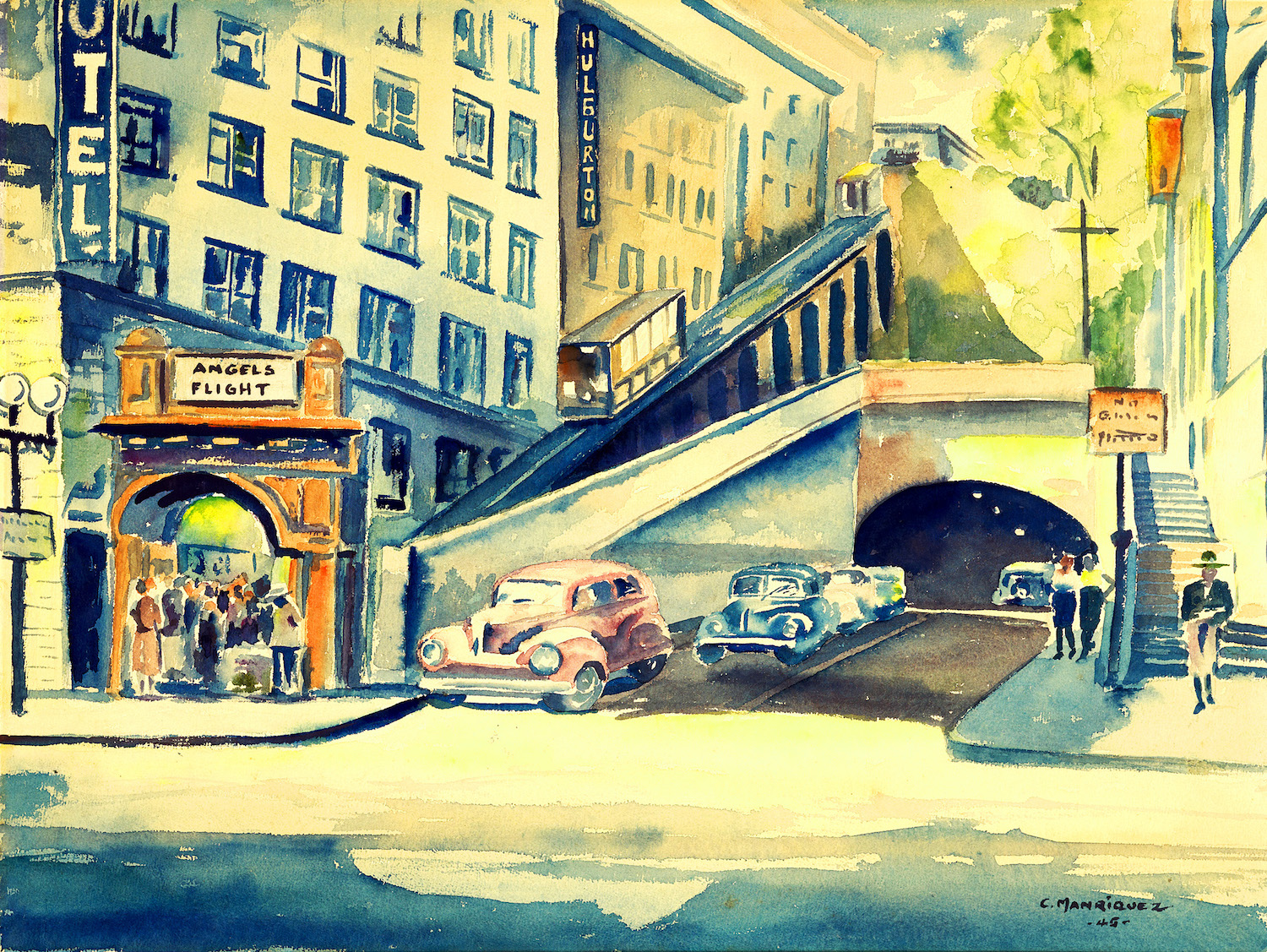 Chapman University Hilbert Museum of California Art acquired a 1930s watercolor by an early Disney artist, Carlos Manriquez. The purchase is the museum’s first in six years through its acquisition fund, supported by donations from patrons.

“When we learned that this painting had become available through a collector, we knew we had to acquire it,” said Mary Platt, director of the Hilbert Museum. “Not only is this a wonderful example of California Scene painting – a genre of watercolors and oils depicting daily life in the Golden State – but it is also an example of a work by a Latinx artist who has worked at the Walt Disney Studio in its early years, possibly Disney’s first Latinx artist.

“We believe the name and talent of Carlos Manriquez deserves wider recognition. Because our museum is unique in showing both fine art and the art of animation from creators who have worked for Hollywood film studios, there’s no better place for this work, for posterity,” says Platt.

A chance encounter leads to a historic animation career

Carlos Daniel Manriquez was born in Mexico on April 10, 1908 and would eventually move to Los Angeles. His family lore says that one day, 20-year-old Manriquez was sitting in a park, scribbling some sketches, when he became aware that a man was watching him draw. Manriquez had just finished and was packing his pencils and sketchbook when the man asked him if he wanted a job.

The man was Walt Disney – and soon after, Manriquez joined the Walt Disney Studio as its first full-time background painter. He was also, by most accounts, the first artist of Mexican descent at Disney, starting work there in 1929 and leaving the studio in 1938.

Disney’s background department eventually expanded to include Emil Flohri and remained a two-man business until 1931, when a third artist, Mique Nelson, joined the team. They were responsible for creating the scenic backdrops on which the hand-painted cels were placed and photographed. Their projects included Disney’s popular “Silly Symphonies” series of animated shorts, as well as many of the studio’s Mickey Mouse shorts.

While working in the animation industrylike many other Los Angeles artists, Manriquez painted the everyday life around him in his spare time – a regionalist style that would later come to be known as the “California Scene” genre.

After leaving Disney, Manriquez worked for Warner Bros. Animation, where he continued to paint backgrounds for cartoon shorts. He then moved to Mexico City, where he worked on “Rocky and Bullwinkle” at Val-Mar Productions. Manriquez then set up his own studio in Mexico. He died on May 1, 1981, at the age of 73.

The Manriquez painting acquired by the Hilbert Museum is a watercolor depicting Angels Flight, the famous narrow-gauge funicular in downtown Los Angeles that opened in 1901 and still carries passengers up and down Bunker Hill. The painting is undated but was probably created in the early 1930s when Manriquez was working at Disney – but painted during his personal time (many California scene painters worked in movie studios to earn their living). life and painted scenes of Californian life in their spare time, weekends and holidays).

The hillside railroad, still a tourist attraction today, was a popular subject for many well-known California scene painters, including Ralph Hulett and Ben Abril. Manriquez gives the scene a whimsical touch and depicts Angel’s Flight as it looked in the 1930s, in its original location next to the Third Street Tunnel. The funicular was then moved and opened at its current location, opposite Grand Central Market, in 1996.

The newly acquired painting is currently cataloged in the permanent collection of the Hilbert Museum and will be displayed to the public at a later date.