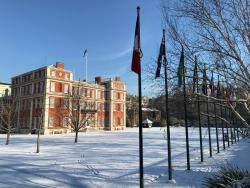 Guy Hewitt | Time for Change in the Commonwealth | On point

Given the significant drop in resources and the questioning of the relevance of the Commonwealth Secretariat, a cloud of uncertainty covers the twice postponed Commonwealth of Nations Summit to be held in Kigali, Rwanda, the week of 20 June.

The Commonwealth Heads of Government Meeting (CHOGM) will also be affected by a personally embattled incumbent president, as well as the questioning of the host and new president’s human rights record.

As Prince Charles begins to acclimate to his future role as head of the Commonwealth, many are focusing on the likely change in the direction of the organization given the heated campaign for the position of Commonwealth Secretary General.

Despite its colonial origins, the Commonwealth was able to refute claims of being a “colonial club” harnessed to Britain. His most acclaimed role in the anti-apartheid struggle testifies to this. Mozambique’s membership in this ‘family of nations’, followed by Rwanda, signaled that membership is more about shared values ​​than a shared history of Empire.

Nevertheless, the Commonwealth remains at a crossroads, its presence and purpose unknown or ambiguous to most of its citizens and many of its member states ambivalent about its current and future role. If the Commonwealth is not just to survive but to thrive, urgent action is needed.

Despite mechanisms such as the Commonwealth Ministerial Action Group (CMAG) to ensure respect for core political values ​​- democracy, rule of law and good governance – the organization has come under heavy criticism for its ambivalence in its stock. While Fiji, Nigeria and Zimbabwe, among others, have been suspended for violations, critics have pointed to an overreliance on peer pressure and moral suasion. More recently, he has been accused of ignoring human rights violations, especially sexual orientation, especially anti-LGBTQ+ laws.

While the Commonwealth Secretariat has become synonymous with the Commonwealth, its network actually consists of three intergovernmental organizations and more than 80 professional and civil society organizations, the links of the latter perhaps stronger than those within. government spheres.

Nevertheless, the Commonwealth Secretariat has, at best, pretended to create effective synergies and partnerships within this Commonwealth to coordinate strategies, plans and programmes, or to maximize visibility to ensure an appreciation of the role and the value of the Commonwealth.

To the same extent, the Commonwealth Secretariat has failed to reposition itself as the cross-regional hub of nascent regionalism (Caribbean Community, Pacific Islands Forum, Southern African Development Community, etc.) that now dominates the multipolar world order. With a diverse global membership, the Commonwealth is in a unique position to facilitate an interface of these regional alliances seeking to consolidate regional social, cultural, economic and political security.

To ensure continued relevance, the Commonwealth base must be de-centred from London and move beyond high-level gatherings and sparse technical assistance to become a meaningful umbrella organization for its member states and their regional groupings.

Prince William’s recent comments suggesting he doesn’t mind being the head of the Commonwealth and that he thinks it could be led by someone other than a member of the royal family have been seen by some as incompatible with the Queen’s engagement as head. of the Commonwealth. I do not agree.

I support republicanism in Barbados and across the Commonwealth as a symbol of self-determination, which I assume is Prince William’s view, however, in 2018 I recognized and acted on the existential threat to the Commonwealth if the Crown passes without succession to the leadership being resolved. Although this is not a hereditary role, I am acutely aware of the challenges, given the size and diversity of the Commonwealth, in trying to democratize this role.

Given the direct relationship with Heads of Government, the Secretary General of the Commonwealth Secretariat is the de facto head of the Commonwealth “family”. As such, it is imperative that the person holding this position effectively discharges the duties and functions of this senior office with vision, efficiency, accountability and integrity.

Following a multitude of ad hoc organizational changes, the Commonwealth Secretariat has come under intense criticism, much of it publicly, for a lack of transparency and accountability and a weak institutional structure. Concerns have also been expressed about the lack of clarity of its programs and the variable quality of work.

Members expressed their dismay at this situation by cutting their funding to the organization, a move I interpret as a diplomatic vote of no confidence.

It is with dismay that I have been forced to come to terms with the reality that under the leadership of the first female Secretary General, someone I personally love and who shares Caribbean roots, the core values ​​that under -tend the Commonwealth have been more trampled upon.

To be fair, even if it hasn’t just started, enough is enough. Good governance should not just be a concept but a lived reality. It is not just about the future of an individual, but about the survival of an institution.

I hope the leadership will remedy this situation by giving serious consideration to those vying for this crucial post, especially the candidate from Jamaica.

However, this should not be a change for change situation. Leaders must ensure that there is an enabling environment to ensure that the Commonwealth, coordinated by the Secretary General, is able to meet and realize the aspirations and expectations of its members.

Having created a bureaucratic monster by creating the post of Secretary General which is exclusively responsible to them, the Chiefs must act urgently to create new systems of governance ensuring that all officers and organizations of the Commonwealth act in a manner consistent with its charter.

While the Secretary General is ultimately accountable to the Chiefs, between summits an ongoing process of good governance is needed. This should be exercised by a council of ministers, possibly foreign ministers, and then by a council of governors and its relevant committees between ministerial meetings.

In one of her past speeches to Heads of Government, the Queen has warned that we must not take the continued existence of the Commonwealth for granted. I took this as a royal acknowledgment, albeit cleverly worded, that continuing on the current path of descent and decline may prove fatal to the Commonwealth. Something has to be done if we are to guarantee the survival of the Commonwealth. Now is the time to act.

Guy Hewitt is the former High Commissioner for Barbados to the UK and has worked with four Commonwealth Secretaries General. He is currently a senior research fellow at the Institute of Commonwealth Studies, University of London. Send your comments to [email protected]

The holiday season is coming early with days off for many