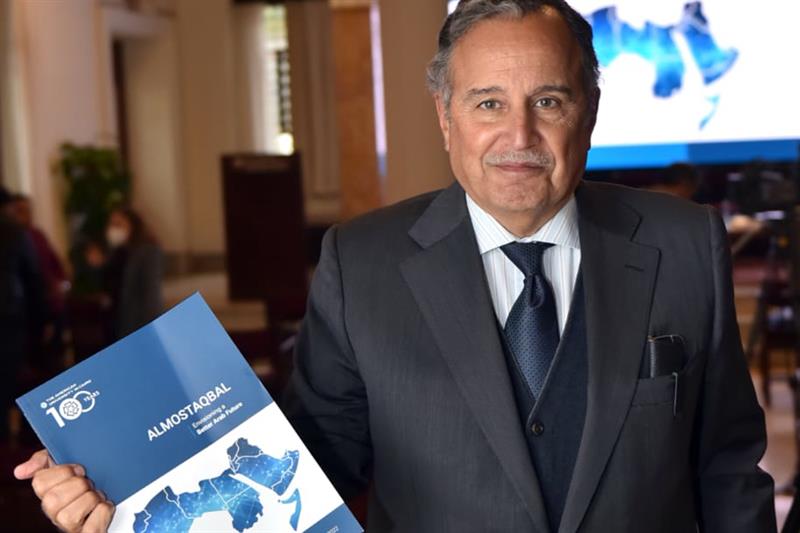 Al-Mostaqbal: Envisioning a Better Arab Future is the title of a well-researched report launched on Sunday by the American University in Cairo.

The culmination of three years of workshops and conferences, this landmark report was designed to answer some key questions about the state of socio-economic stability and regional security.

With contributors from across the Arab world, Al-Mostaqbal’s starting point was the need to address the lack of socio-economic stability in the Arab world and the lack of a coherent security system to which Arab countries could subscribe, particularly at a time when the non-Arab players in the region, Iran, Turkey and Israel, have each expanded their regional influence in one way or another – with possible “seeds of a new regionalism”.

According to the report, the expectation of some Arab states that the Arab Spring would bring a better socio-economic reality, and possibly the continuation of constructive security measures, was quickly abandoned.

Today, the fragile political and social structures of several Arab countries are in fact weakened. Libya, Yemen and Syria, the authors of the report note, are now significantly more vulnerable as they have plunged into internal military conflicts that have escalated into proxy wars.

Meanwhile, the report notes, economic hardship and poor governance issues remain difficult challenges for most countries in the region, in a way that significantly undermines the chances of much-needed development. Without some coherent and achievable patterns that do not succumb to pressing issues at the expense of creating a vision for the future, the report points out, these issues will not be effectively addressed even if temporarily managed.

According to the report, socio-economic stability alone cannot answer the difficult question of a plan for the future. A vision on security is equally important, according to the authors of the report.

To create this vision of security, some critical issues need to be resolved. These include chronic issues like the Arab-Israeli conflict, especially on the Palestinian front. They also include some new but equally critical and difficult to resolve issues such as the dispute over the Grand Ethiopian Renaissance Dam (GERD) and the battle for influence over Mediterranean security and resources, the humanitarian crisis resulting from the military conflicts, and climate change tops the list.

The two working groups which dealt with socio-economic and security issues have drawn up alternative paths for the future. According to an analysis shared by the Security Task Force, there are four possible scenarios for the future of the region.

The first is that of “continuation” according to which “current trends continue into the future without significant change”. The second is that of “collapse”. This means a scenario in which current trends “simply fail to meet growth and development goals, which could lead to greater regional instability, escalation of conflict, instances of state collapse, geopolitical competition on a regional scale and, potentially, a regional armed conflict”.

This second scenario is not too imminent, but it remains a possibility and as such should remind policy makers to act quickly to avoid leaving the region in a stalemate.

In a third scenario proposed by the security working group, the region could be in a situation of “constant change”. This should mean the introduction of “balanced trends with limited manageable conflict resulting in stabilization”. The fourth scenario proposed by the security working group is that of “transformation”. This should enable the “desired scenario as the region moves towards a more stable and inclusive regional system, with successful progress in continuing conflict resolution and management processes.”

Creating a free market space and providing more opportunities for small and medium-sized businesses, the report notes, could improve the chances of “steady transformation” over those of “collapse”. He added that with improved national economies, there is a chance for regional economic integration, which could start with a few countries and expand to include more states – perhaps first in the economic context. and later on the security front.

“In fact, recently, many Arab leaders have mentioned regional integration as part of long-term development programs and/or regional security arrangements, for example Saudi Arabia-Egypt-Jordan coordination in the Red Sea as well as as the recent rapprochement between Egypt, Jordan and Iraq,” the report noted.

However, the report notes that “among the regions of the Global South, the MENA region falls in the middle” when it comes to development indicators – despite the uneven distribution of this development among countries in the region. Further, the report states: “Furthermore, many human development gains in areas such as education, public health and life expectancy have not translated into improved employment, ‘socio-economic empowerment or social participation at national or local levels’. .

The report notes that “an extreme case of state failure” like that of Lebanon is actually a function of both “economic and political” issues. The result is a “crisis” that shows how the state of governance endemic to the region can exacerbate regional insecurity.

Economic cooperation and conflict stabilization or, better still, conflict resolution, are the two main remedies that the authors of the report propose, at least as short-term remedies. In the long term, the report calls for greater integration designed to meet specific country needs and collective interests.

The security and socio-economic working groups looked at disabilities before advancing on short- and long-term remedies. But neither group foresaw the inevitability of “collapse” versus “transformation.”

According to Nabil Fahmi, Dean of the School of Global Affairs and Public Policy at the AUC and Chair of the project that produced this report, “no single report can offer solutions and recommendations on the many complex challenges facing the region is facing. I believe, however, that we have put forward some invaluable suggestions in this report, which can hopefully be developed and developed by others, both in the region and beyond”.

*A version of this article appeared in the March 24, 2022 edition of Al-Ahram Weekly