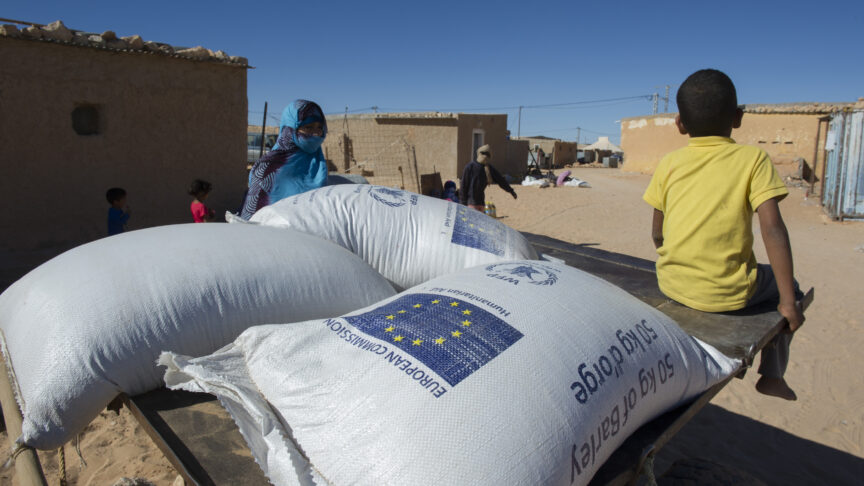 Russia’s war on Ukraine is strangling the world’s supply of essential agrifood products. Taken together, the two countries account for 53% of the world’s sunflower oil trade and 27% of its wheat trade. The growing threat to global food security has led to protectionist export bans and sharply rising prices for both commodities.

European policymakers might be tempted to focus on other war-related issues before tackling the food crisis. But the subject deserves immediate attention. For, at a time when China and Russia are striving to increase their influence in Africa at the expense of Europe, the crisis is an opportunity to demonstrate the value of the Africa-Europe partnership.

As the votes of African countries on a recent UN resolution condemning Russian aggression against Ukraine show, Europe should be concerned about the state of its relations with Africa. Although European diplomats pressured African countries to support the resolution, many of them abstained, voted against or did not participate in the vote. Hardline European policymakers – a vocal minority – argue there should be consequences for African states that did not support the resolution. One option would be to cut aid to those who voted against. But that would confuse revenge with an interest-driven strategic response.

Lessons from the pandemic response in Africa

There are several parallels between the current food crisis and the rush for covid-19 vaccines at the start of the pandemic. Europe has treated supplying vaccines to Africa as a charitable effort, while Russia and China have done so for interest. From the charitable motive came a humanitarian response: the COVAX initiative, a multilateral mechanism for pooling global resources. While Europe saw the issue as a humanitarian obligation to Africa, Russia and China saw vaccines as a way to strengthen their influence on the continent. This is how the geopoliticization of vaccines in Africa has taken place.

Europe should apply the lessons of this experience to its response to the food crisis. In doing so, European leaders should try to understand how China and Russia have turned vaccine donations into a geopolitical commodity and why Europe’s charitable response has created a backlash in Africa.

The moral argument for European vaccine distribution centered on equitable access to a global public good. European policymakers publicly embraced the humanitarian and moral logic but, as vaccine supplies were limited, there was much tension between their domestic obligations and their foreign commitments. As expected, domestic bonds won out.

African leaders have been angered that Europe’s approach to vaccine donations puts their countries at the back of the queue. They reacted by pushing for an African solution to the crisis. But, when asking for free access to vaccine patents, European governments claimed they were unable to compel pharmaceutical companies to grant it. The episode only reinforced the widely held perception of European hypocrisy on the issue.

Russia and China have spotted an opportunity to gain competitive advantage. They did this in part by avoiding multilateralism. This served the dual purpose of weakening the multilateral response of Europe and the West while at the same time increasing the visibility of their bilateral aid. They also favored strategic communication. Leveraging the advantage of national branding – which is more recognizable than amorphous multilateral aid – media promotion of their vaccine deliveries was as important as the supplies themselves.

But, in the end, it was Europe’s hypocrisy that made the Russian and Chinese vaccine strategies so effective: Europe called for fairness in vaccine distribution while simultaneously hoarding doses and by denying Africa the means to manufacture them for itself. In contrast, Russia and China put the needs of African states (and other developing countries) ahead of their national obligations. While Europe was hoarding, Russia and China were exporting. In this way, the two countries did not need to make more donations than Europe or give free access to their vaccine patents (which, due to their questionable quality, were not in demand). Beijing and Moscow had only to recall that if Europe did not respect its commitments, it gave priority to the needs of Africa. Although the West has been the world’s largest contributor of vaccines (quantitatively and qualitatively), it has lost the battle of narratives.

It is important to remember that the food crisis follows the economic devastation caused by the pandemic, which has led to a rapid increase in the debt of African countries. European states’ shortcomings in vaccine supply and then their response to this debt crisis could help create a narrative in which they are held responsible for the threat to global food security (inaccurate as that may be). . The food crisis will continue for some time. Since scarcity-induced price hikes will have some of their worst effects in Africa, it will be natural to channel anger into blame. China is already developing a narrative in which Europe’s economic war against Russia is the immediate cause of the food crisis.

A major difference between the vaccine rush and the food crisis is that, this time, China cannot afford to compete with Europe. China would normally seize the opportunity to strengthen its influence, but it cannot play geopolitics with its already stretched stocks of agri-food raw materials. With vaccines, Beijing could put its geopolitical goals above its national obligations. But he sees national food security as an existential issue. As a result, China will look after its domestic needs first.

Russia is another story. The Kremlin identified its strength in food security even before its all-out invasion of Ukraine, coining the phrase “wheat diplomacy.” Russia’s recent warning that it would only supply agrifood products to its friends speaks for itself. The current obstacles to Russia’s instrumentalization of food security – transport and harvest disruptions – will not last long. Western sanctions on Russian agricultural trade would have a greater impact, but would not stop Russian exports forever.

While Russia clearly intends to use its agricultural sector for geopolitical purposes, the Western bloc – Canada, Australia, the United States and Europe – is collectively well placed to help Africa with excess food stocks and possibly longer-term solutions. The West should think about the strategic use of this important asset. It would be a mistake to relegate this question to humanitarian action without interest. On the contrary, the West should marry the humanitarian with the strategic.

How should Europe react?

First, Europe should tackle these problems immediately. Rather than waiting for the food crisis to reach a crescendo and reacting to calls from Africa, Europe should communicate its intention to act now and frame its approach as born of mutual interest – not charity . This would demonstrate Europe’s commitment to a partnership of equals.

Second, Europe should recognize that it will be impossible to cooperate with China and Russia on the issue. European leaders should form a coalition of those who want to tackle the food security crisis, allowing their international partners to join the effort when possible. An added geopolitical advantage of this approach is that it would open the door to countries that have not sided with Europe, China or Russia, such as India and the United Arab Emirates. These undecided states are currently navigating between rival geopolitical blocs. The fact that this is partly a humanitarian issue should reduce the cost of alignment with Europe.

Third, as with the vaccine rush, African states want to move away from handouts and towards improving their own productive capacity – from dependency to independence. Europe should welcome this as a common interest. And it should take the lead in announcing its intention to use the crisis as a catalyst to strengthen its partnership with Africa through the development of the continent’s agricultural sector. Africa has the potential to become a major wheat producer, which would improve Europe’s food security as well as its own. And an effort to share the technology to achieve this would be much less politically controversial than that around vaccine patents.

France has taken the lead in this area by creating its FARM initiative. This could turn into a pan-European project and then into a project involving Europe’s partners across the world.

African countries could also use this moment to present a clear concept of their various international partnerships. During the pandemic, they held up vaccine deliveries from Russia and China as examples of how Europe could be a better partner. But, when Russia inevitably uses its food aid to gain geopolitical advantage, the transactional nature of that aid will become even more explicit. African states should ask themselves if they want Europe to be transactional as well.

In the meantime, European leaders must realize that it is difficult to reconcile charity and interests. As the votes of African countries on the UN resolution show, charity buys little influence.

The European Council on Foreign Relations does not take a collective position. ECFR publications represent the views of its individual authors only.

Tourism leaders gear up for a super event | News