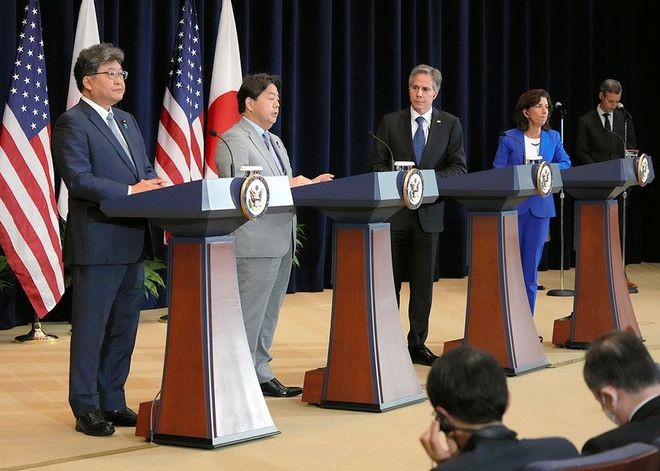 EDITORIAL: ‘2 plus 2’ talks must have one goal: protecting free trade

Japan and the United States have started a new round of regular ministerial-level talks on economic and national security issues. With the international order facing a series of serious challenges, there are strong arguments for closer cooperation in these areas between the two allies.

If, however, the two major economic powers violate the principle of free trade in their resolute quest for security, the foundations of the world economy, including their own, will be weakened. Exceptions to the principle must be limited to what is strictly necessary.

On July 29, top foreign and economic policy officials from the two countries held the inaugural ministerial meeting of the Japan-US Economic Policy Advisory Committee, or the so-called “two plus two” economic meeting, in Washington.

The new Economic Security Dialogue was launched with the recognition that “foreign and national security policies and economic policy are now inseparable and fundamentally linked”, in the words of Koichi Hagiuda, Japan’s Minister of Commerce and Economy .

The joint statement issued by the four officials – Japanese Foreign Minister Yoshimasa Hayashi, US Secretary of State Antony Blinken and US Secretary of Commerce Gina Raimondo, as well as Hagiuda – leaves no doubt that it aims to repel China.

“Ministers expressed their deep concern and opposition to the harmful uses of economic influence,” the statement said. They agreed to promote the US-led Indo-Pacific Economic Framework for Prosperity (IPEF) and strengthen bilateral cooperation to foster supply chain resilience in strategic sectors, including semiconductors. .

In addition to the increasingly fierce confrontation between Washington and Beijing, Russia’s invasion of Ukraine has raised economic security concerns. It is now inevitable that certain restrictions on international economic transactions will be imposed to prevent the theft of vital and sensitive military technologies and to guarantee a stable energy supply.

It should not be forgotten, however, that taking such measures carries the risk of undermining the principles of free trade and harming the world economy.

Tokyo and Washington plan to shell out huge amounts of public funds to support the production and development of computer chips and storage batteries. But World Trade Organization rules prohibit state subsidies that hinder fair trade. Both countries have harshly criticized China for providing shady government subsidies to state-owned enterprises.

It’s hard to argue that both governments have provided compelling explanations of how their planned support for key domestic industries aligns with their traditional stance on the matter.

Japan and the United States say they will seek to build “a rules-based international economic order”. But Washington still maintains unjust and unreasonable additional tariffs that were imposed on imports of steel and aluminum products by the previous Trump administration. The bilateral free trade agreement reached under the Trump administration falls short of the tariff elimination rate required for such a trade agreement under WTO rules.

The calls of the two nations to respect the rules of international trade will only carry weight if they demonstrate their firm commitment to them.

China, meanwhile, shows no signs of letting go of its propensity to distort trade for political purposes. Beijing is now considering the introduction of new regulations aimed at prohibiting the government and infrastructure companies from buying office equipment from foreign manufacturers.

Of course, the WTO allows countries to make exceptions to its trade rules for security reasons. But abusing this provision would amount to flouting free trade. Major economic powers must not commit the folly of providing incentives for the escalation of such abuses between trading partners.

This imperative requires an effective system to ensure independent assessments of all such exceptions for their legitimacy.

The first and foremost trade policy challenge for Japan and the United States is to revive the moribund dispute settlement function of the WTO as quickly as possible.