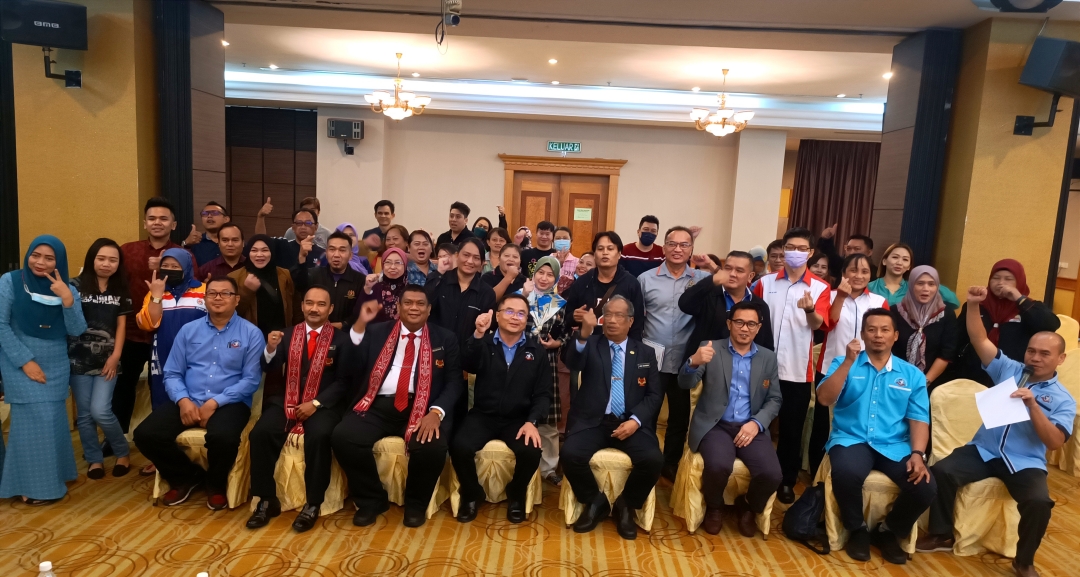 (Seated from fourth from left, front) Abdul Rahman, Omar and others pose for a group photo. – Photo by Peter Boon

SIBU (22 May): Congress of Civil and Public Service Employees Trade Union (Cuepacs) President Datuk Adnan Mat wishes to highlight his proposal to raise the minimum monthly wage for civil servants to RM1,800 to the Prime Minister during the ‘ Hari Bomba ‘2022 celebration in Penang today.

This was revealed by Cuepacs General Secretary Tuan Abdul Rahman Mohd Nordin who said that their Chairman will also voice the other proposal on the two-year increment for civil servants earning more than RM1,800 per month in Datuk Seri Ismail Sabri Yaakob.

“Our President will take the opportunity to meet the Prime Minister who will be officiating at the National ‘Hari Bomba’ 2022 in Kepala Batas, Penang tomorrow,” he told reporters after the ‘Randau Isu-Isu Semasa Bersama Presiden Cuepacs Malaysia’ at the Paramount Hotel here yesterday.

Abdul Rahman pointed out that civil servants earning a monthly salary of RM5,000 and below are greatly affected by the higher cost of living.

Cuepacs, he added, also urged the government to control commodity prices, where the Ministry of Internal Trade and Consumer Affairs (KPDNHEP) can limit the prices of key food items such as flour, sugar and rice.

He reiterated Cuepacs’ call on the government to implement the new pay system soon in view of the rising cost of living.

The current size of the country’s civil service stands at 1.6 million people.

Meanwhile, Cuepacs Sarawak President Omar Bahrain Unin said the main purpose of the event was to invite Cuepacs officials at the national level to share on current issues related to civil servants, which was requested by Cuepacs from the government and what might be expected. announced by the government to all civil servants.

He pointed out that with a minimum wage of RM1,800 coupled with fixed allowances, civil servants should earn a monthly salary of RM2,300-2,400.

“In this regard, they will be above the national poverty line of RM2,208 per month,” he said.