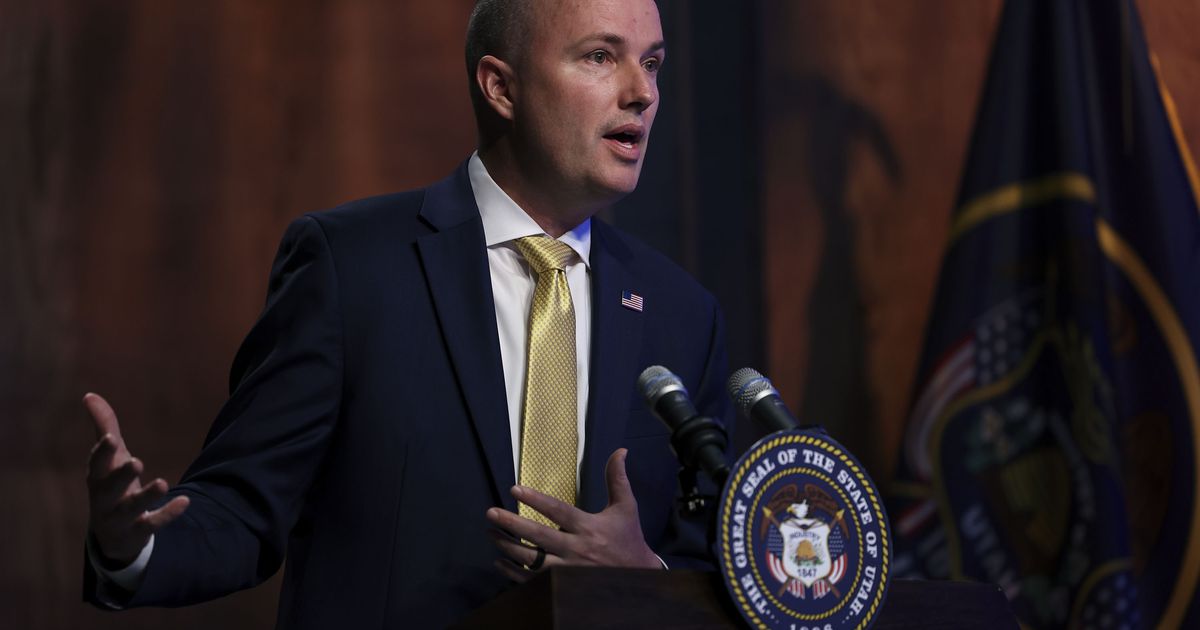 Cox’s energy plan is lacking, says Robert Gehrke, but could be a starting point if Utah wants to get serious about climate

Utah has a unique opportunity to start responding to climate change, and that time has come.

His anger was sparked when he was asked if, on the day he declared another statewide drought emergency, he saw a contradiction in also calling for more oil drilling and gas companies to mitigate inflationary pressures.

“People who are starving right now because they can’t afford a loaf of bread at the store are much more important to me and our national security is much more important in the short term,” the agitated governor said. “I’m so sick of these false choices being presented to us.”

To suggest that we have to choose between starvation or extracting fossil fuels seems to me like one of those false choices. But the governor’s most important point was that government regulation cannot slow climate change.

“If we did everything that has been proposed by all the environmentalists in the state right now, it would have no impact on global emissions,” Cox said, noting that emissions in China and India would triple any reduction. .

Given his annoyance, it’s probably no surprise that Cox released his new “State Energy and Innovation Plan” on Tuesday—it wasn’t really focused on the state leading to averting climate catastrophe.

The word “climate” appears three times, twice encompassing “market-based climate solutions” and once referring to the recent Intergovernmental Panel on Climate Change report mentioning carbon capture and sequestration, a technology that has yet to be widely implemented.

To be fair, he touts a nearly 46 percent per capita reduction in greenhouse gas emissions between 2002 and 2017 and notes that Utah is on track to meet the Legislature’s goal of producing 20% of the state’s electricity from renewable sources by 2025. He suggests setting a new goal but doesn’t plant any flag on where it should be.

In fact, it makes very few specific recommendations. It is more of a conceptual statement of values ​​than a blueprint committing to an energy future of “any of the above”, promoting US energy independence, supporting the economies of coal-producing countries and investing in emerging technologies and innovative infrastructure.

None of this tells us how we are going to get to where we need to be in terms of energy or what the role of the state will be in getting there and “all of the above” is not so much a plan as it is throw stuff at the wall to see what sticks.

A real plan would be: look at Utah’s projected growth; the demand that growth will place on our energy resources; lay out a menu of options to meet those needs, including trade-offs for each variation of the recipe. Then he would offer a preferred course of action and specific policy recommendations for how the governor would prefer to move forward.

It does none of that.

At the same time, Cox described this as a living document that will evolve over time and hopefully we’ll see some flesh added to these bare elements in the future.

“I feel like the governor and his team have laid out a very clear framework for our current state of affairs with Utah’s energy sources,” Sarah Wright, Utah’s executive director, told me. CleanEnergy. “It’s a starting point and the next step is to operationalize it and create programs and goals to push things like how many houses do we want to renovate? How many electric vehicles do we want on the road? And how to get there?

As these concrete policy proposals take shape, it is imperative that climate impact is more than an afterthought. It must be at the center of a real and concrete plan.

The report opens by stating that “affordability, reliability, and sustainability are Utah’s priorities for all of its energy-related work.” A recent report by the Citizens Utility Board ranked Utah 1st in affordability, 15th in reliability, but in the bottom third of states when it comes to environmental factors that make our grid sustainable.

We can do better without sacrificing affordability and reliability.

Rather than simply updating a revolving goal, Utah should follow the lead of other states and focus on reducing greenhouse gas emissions, which would require a holistic approach to the problem – such as reducing pollutants from car tailpipes, polluting industrial emitters, buildings and, yes, the generation of clean, renewable energy.

Before the last legislative session, I wrote about an idea floated by State Senator Kirk Cullimore to halve harmful emissions by 2030 through a combination of tactics – higher registration fees for cars guzzlers and some sort of cash-for-clunkers program to get them off the road; improved building standards; and a simplified cap and trade policy for industrial polluters.

The bill was never drafted but could provide a framework for new emissions targets.

In the months and years to come, Utah will receive hundreds of millions of dollars from the federal infrastructure bill, giving us a unique opportunity to go big – really big – on a clean energy future.

We need strong leadership at the top and recognition of the dangers posed by climate change. Without this vision, we risk seeing our lakes and reservoirs continue to disappear, wildfires and dust storms rage, and our agriculture and ski tourism industries threatened.

It should be a clear choice – not a false choice.

On the trail of the origins of Covid-19