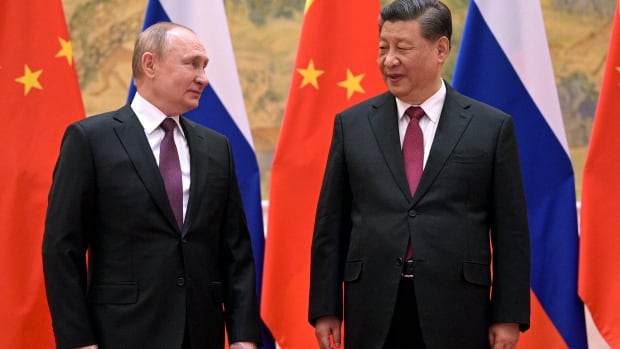 Can crucial trade links save the world from war? Putin’s invasion created skeptics

The Correlates of War sounds like the title of an airport bookstore thriller.

But known by its somewhat unworthy acronym, the COW Project is actually a large collection of research into the history of wars and their causes.

And one of the most debated problems that the COW Project still struggles to solve concerns the theory of trade and peace, the idea that close economic interdependence helps discourage countries from going to war.

As Russian troops swept into Ukraine in February and China sent warplanes flying over the Taiwan Strait earlier this month, resolving the question of whether our best economic interests can save us from conflict – or it’s just a liberal illusion, as one author suggested in the title of his book – has perhaps never been so relevant.

“As a species, we tend to go to war,” University of Ottawa anthropologist Scott Simon said in a phone interview last week. “Since the beginning of our species, basically, we’ve had this tendency to either trade with other people or go to war with them.”

Simon quotes the French philosopher Raymond Aron according to whom war is a particular type of social arrangement.

In the age of extremely powerful nuclear weapons, this is a social arrangement where even the smallest conflict could lead to millions of deaths.

The idea that a dispute over the Chinese-claimed Spratly Islands and Taiwan would escalate into a nuclear conflict was an interesting topic for the science fiction book. 2034: A Novel of the Next World War. This may seem unlikely in reality.

But that’s exactly the subject of a non-fiction article in the Financial Times last week titled “America must consider the risk that a war against Taiwan could go nuclear.”

“If the opinion of Washington’s foreign policy elite is correct – that such a war is no longer merely possible but probable – then the assessment of such risk must be at the forefront of every discussion” , wrote Michael Auslin, a fellow at Stanford University’s Hoover Institution.

Besides his anthropological perspective on humanity’s propensity for war, Scott Simon has a second qualification for discussing a possible Chinese invasion of Taiwan: he is co-holder of the Chair of Taiwanese Studies at the University of Ottawa and spent more than a decade on the democratic island that Beijing insists is a disloyal province of the People’s Republic of China.

Despite – and perhaps partly because of – Vladimir Putin’s attack on Ukraine, Simon is convinced that a Chinese invasion is not imminent. Military experts say that with a reserve army of more than a million, missiles, planes and other defenses solely directed against a potential Chinese offensive, a Ukrainian-style incursion into Taiwan would be costly.

“The military capability is there to deter an invasion,” Simon said.

But as he sketched in an article last week for the Center for International Policy Studies, Taiwan also remains an indispensable source of semiconductors – the chips used in everyday consumer goods and in many military applications, not only for the West but also for China. .

Despite an expected increase in new investment under the CHIPS and Science Act that US President Joe Biden signed into law by executive order last week, neither the US nor China is yet ready to go it alone in integrated manufacturing at the global scale of microelectronics.

Jia Wang, acting director of the China Institute at the University of Alberta, based in Edmonton, said that while Taiwanese microchips get the most attention, a conflict as serious as an attempted invasion – or a blockade – of Taiwan would disrupt trade between China and North America worth hundreds of billions of dollars a year.

And as a small trading nation, Canada would be hit harder than the United States or China, both of which have huge domestic markets.

Despite attempts by both sides to find or create alternative sources of essential goods and services, the Chinese and North American economies are complementary, she said, and a collapse in trade in food and raw materials from one side and cheap consumer goods dependent on mass labor on the other hand could devastate both economies.

According to a report last week in Japanese business publication Nikkei Asia, a “Taiwanese emergency” that led to Western sanctions against China could cause $2.6 trillion to evaporate from the global economy.

Dan Ciuriak, an economist and senior research fellow at the Center for International Governance Innovation, based in Waterloo, Ont., is a strong proponent of the idea that self-interest can prevent countries from going to war.

Critics of the idea cite many examples to the contrary, the most famous being World War I, when many believed an economically integrated Europe would never lose everything in years of deadly fighting.

Some regard this war as an accident. Others point to the many differences with the current era, including the existence of nuclear warheads and the strategy of mutual assured destruction.

The economic failure of war

More recently, Putin’s invasion of Ukraine seems to prove that an autocratic ruler can make a fatal miscalculation, imagining an easy victory with political or economic advantages.

“The wild card is Xi,” Ciuriak said, referring to Chinese President Xi Jinping, who is currently seeking a third term as the country’s supreme leader. “You can’t rule out the possibility that he’s doing something incredibly stupid.”

Like Simon, Ciuriak thinks that is unlikely and that with China already suffering the effects of a prolonged pandemic, a collapse in domestic ownership and a series of bad loans abroad, Xi will be guided by economic interests that will ensure its people’s access to foreign imports, including food, and the sale of their exports abroad.

Of course, in wartime it takes two to tangle, and Ciuriak says it’s important for Canada to try to defuse potential conflict and help convince both sides of what it feels obvious: that trade is better than war.

LISTEN | How Canada’s trade relationship with China is changing:

Cost of life9:00 amTrade with the Enemy and the Evolution of Canada-China Trade Relations

Sino-Canadian relations are frozen, but trade between the two countries is hotter than ever. After all, what is a little hostage situation between friends? Paul Haavardsrud breaks down our current trade relationship and asks if it’s possible to boycott the world’s second largest economy.

Canadians should remind China that its economy is growing by three Taiwans a year and that it would be a wasteful and costly effort to bother to crush this reluctant province militarily. The two are already increasingly integrated, sharing investment and technology.

It is also essential to convince the Chinese hawks in the United States that, in what has become a multipolar world, the United States cannot hope to retain the economic and military dominance it had at the end of the Cold War.

To help avoid conflict, a lesson learned from Europe, cut off from crucial energy supplies, is to prepare ourselves so that Canada does not suffer a similar fate.

“We just have to make sure that in areas where we would be likely to be taken hostage…we have to diversify our supply, make sure we have it either domestically or in a friendly country,” Ciuriak said. This does not only apply to microchips.

With one-fifth of the world’s population, it’s reasonable that China would eventually make up about a fifth of the world’s economy or maybe a little more, he said. And as it grows, it will become an even more valuable trading partner for Canada and the United States.

Ciuriak insists that China is not going away and that Canadians must fight for the idea that it is better to continue trading with a country that may not be a fast friend than to lose our trade and the benefits of peace by engaging in a war with a certain enemy where everyone is going to lose.