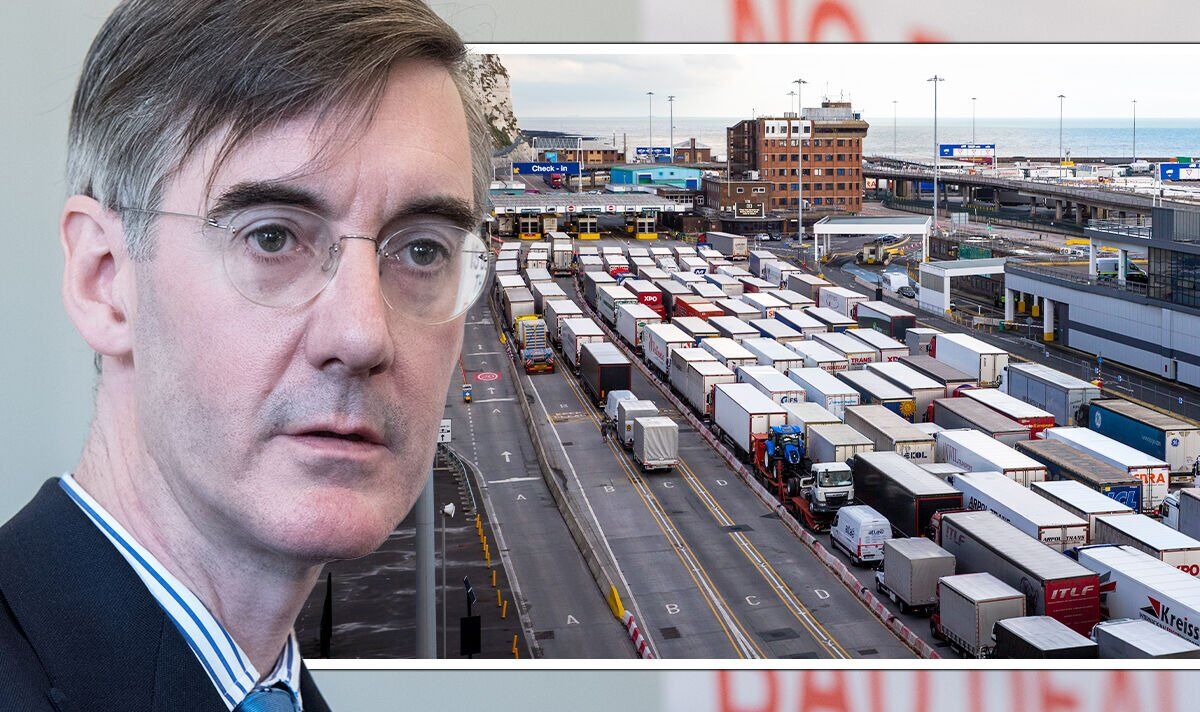 From next year, all EU products destined for the UK market will have to be certified with a new regulatory customs mark in recognition of Britain’s regulatory independence from the bloc. A report by free market think tank, the Institute of Economic Affairs (IEA), calls on the government to act in the interests of consumers and prevent the imposition of costly regulatory barriers to trade.

The report was backed by MP Jacob Rees-Mogg, Minister of State for Brexit Opportunities, who said: “Anyone who believes in free trade will welcome this report. Non-tariff barriers are the delight of protectionists and should be removed wherever possible. “

After Brexit, the EU refused to pursue mutual recognition of UK regulations under the Trade and Cooperation Agreement.

However, to help traders during a transition period, the UK has continued to recognize EU rules and the bloc’s CE marking, which shows compliance.

This is due to end in 2023, meaning all products for the UK market will need to be certified with the new UKCA mark to show they meet the mandatory standards. But the IEA paper warns the change will introduce duplication and costs for companies trading in both UK and EU markets.

In order to avoid such a scenario, the document argues that Britain should unilaterally recognize EU rules even if the bloc refuses to reciprocate.

However, critics warn that unilateral recognition of EU rules could have a Trojan horse effect, potentially risking dangerous or poor quality goods entering the UK market from the rest of the world.

Victoria Hewson, Head of Regulatory Affairs at the IEA, speaking to Express.co.ukpraised the benefits of the approach.

She said: “There’s such a big opportunity for the UK to show leadership here. We’re not talking about a free-for-all where there are no more rules. That would be based on a review careful of the rules in a particular country. We might say, ‘Yes, those rules provide an equivalent level of security, so come in’.”

Trucks at the Port of Dover (Image: Getty)

On the bloc’s earlier refusal to recognize the UK, Ms Hewson said: “It’s unfair, and the EU is totally unreasonable. We don’t have to be unreasonable in return.”

“The EU is now treating the UK as a third country. The irony is that countries like Canada and China are more recognized than us because the EU has totally burned us. The EU won’t . [mutually recognise regulatory standards] because he wants to use it as political leverage, primarily to keep us in the single market, or [now] to get us back.

She argued that continued monitoring of the UK market by Trading Standards and requirements written into contracts could be part of measures to protect consumers from substandard products.

The author of the IEA report added that experts from UK bodies such as the Food Standards Agency, the Medicines and Healthcare products Regulatory Agency and the British Standards Institute could also be tasked with checking standards in other countries. before UK market access is granted.

Dr Peter Holmes of the UK Trade Policy Observatory at the University of Sussex warned that having to meet two conformity assessment marks would prove cumbersome for companies wishing to trade in UK markets and European.

He warned that Mr Rees-Mogg seemed to suggest that unilateral recognition could be extended to all.

Dr Holmes said: “It somehow implies that we are able to act on our own, but it would be the opposite. To accept whatever the EU says is acceptable means that we will not need any control.

“But that doesn’t give Britain control of anything. It’s giving up. And that makes the divergence completely pointless, especially if the actual verification of border compliance is to be postponed until 2025.”

He described the IEA document’s recommendation for unilateral recognition as sensible if it applied to European products, but warned that opening the floodgates to all other countries could be extremely dangerous.

Dr Holmes added: “The UK has, in my view, reasonably decided to remain a member of the European standards bodies CEN and CENELEC.

“This means that it makes sense to freely accept goods made to these standards, but not all goods made anywhere to different and possibly lower standards.”

Ms Hewson argued companies could produce goods to a standard that met both UK and EU standards.

She acknowledged that this raises a question about Britain’s exit point from the EU.

Ms Hewson said: “The difference is that if, for example, EU rules on medical devices turn out to be too bureaucratic, we could say that this EU rule suppresses innovation in healthcare , so we’re going to reform it so it’s easier for our manufacturers and scientists to make this product.”

She explained that manufacturers would be free to choose between making more innovative products or not, with consumers being able to choose products bearing the old CE mark or Britain’s updated UKCA mark.

The IEA says the policy should be adopted for all international trade where the exporting country’s rules meet British standards, bolstering Britain’s credentials as a free-trading nation.

According to the think tank, non-tariff measures, such as commodity regulations and certification requirements, are as bad or, in some cases, worse barriers to international trade than tariffs.

The report includes an estimate that non-tariff barriers have been equivalent to tariffs of up to 20% on some products.

It is understood that tensions exist within the government between supporters of unilateral recognition and those who want to use recognition as a bargaining chip in future trade talks with the EU.

But Ms Hewson said the approach has garnered support from UK businesses worried about having to pay hundreds of millions in extra costs to meet EU and UK requirements.

She added: “It would be a global leader and it would put consumers first in this time of cost of living challenges.”

Here’s how many hours South Africans spend working each week